Festive seasons are a key time for shoppers and retailers, but the response to Hari Raya and Chinese New Year sales this year has been underwhelming compared with previous years.

Malaysia’s middle income group, which form more than half of the population, is feeling the pinch and consequently, tightened their spending following the increase of electricity and fuel prices.

“Based on our observation, Hari Raya Aidilfitri did not bring much higher sales to retailers in Malaysia, as the consumer sentiment is still weak and lack of monetary incentives from the government during this period,” Retail Group Malaysia (RGM) managing director Tan Hai Hsin tells StarBizWeek.

Retailers had expected a sales boost during the Hari Raya celebration, coupled with the 1Malaysia Mega Sale Carnival that started on June 26.

Still, for the like of Zarina Farhan, 40, the prices increases had meant she had to be a lot more thifty. She says her Hari Raya shopping budget has been halved from last year. That is because, Zarina, a mother for two, is feeling the pinch from higher food and fuel prices and that has affected her spending power.

“I am more cautious with my spending,” she says. RGM reported that last year’s Ramadhan and Hari Raya sales which fell in the third quarter had experienced slower overall retail sales of 3.1% despite discounts offered during the festive season.

Its recent report in May also notes that retail sales in the first quarter of this year recorded another slower growth rate of 4.9% from 7.5% growth in the same period last year, as retailers failed to attract buyers although there was a boost from the Chinese New Year celebration season.

However, Tan expects a 6.3% sales growth for the third quarter of this year and for the year to see retail sales grow by between 6% and 6.3%, driven by a better economic outlook, stable labour market and sustainable household income growth.

“Our main concern is still on the cost of living and the inflation rate is still above 3%.

“Purchasing power of Malaysian consumers may be eroded further with the possible increase in the price of petrol, toll rates, electricity tariff and a possible hike in the overnight policy rate (OPR) in the next few months,” Tan says.

While Malaysia has enjoyed sturdy economic growth numbers over the past two quarters of this year, the Government is juggling between reducing fiscal deficit and reducing inflationary pressure.

In the second quarter of the year, the growth rate of Malaysia’s gross domestic product (GDP) quicken to 6.4% year-on-year, the highest pace in six quarters. That rate beat market expectations thanks to strong export growth and robust private domestic demand.

The strong numbers lifted the overall GDP growth for the first six months of 2014 to 6.3%, compared with 5.5% in the corresponding period last year.

In Budget 2014, the Government introduced a subsidy rationalisation programme as part of its efforts to rein the burgeoning fiscal debt, which in turn, increased the cost of living.

The subsidy rationalisation started with a 20 sen hike in fuel prices in September 2013 to the abolishment of sugar subsidies in October.

The price of electricity was upped in January this year and the price of industrial gas went up in May.

Malaysia’s middle class is also affected by the hike in the cost of living, at the same time having to endure high property prices and higher borrowing cost.

In July, the inflation rate inch slightly to 3.2% year-on-year from 3.3% in June, which also slightly lower than the consensus expectations of 3.3% .

She explains that the moderation in the July’s consumer price index (CPI) was mainly due to slower growth in food and non-alcoholic beverages, while most other components were relatively steady. 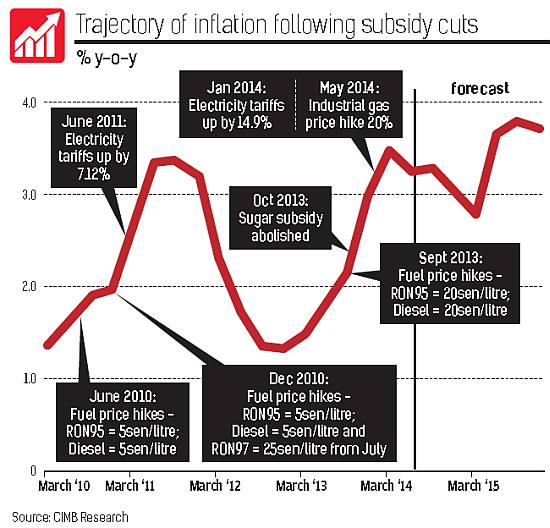 While the previous subsidy rationalisation programme dented consumer sentiment, with the Malaysian Institute of Economic Research (Mier) pointing to the consumer sentiment index (CSI) in the fourth quarter of last year falling below the 100-point threshold for the first time in five years, that meant consumers are more cautious with their spending.

However, Mier’s recent second quarter 2014 CSI climbs past the 100-point level, suggesting that the confidence levels among consumers is improving.

“The underlying demand remains strong despite the rising cost of living, thanks to the low unemployment rate, high labour force participation rate, private sector average wage growth of 6.6% in 2013 from 6% in 2012, average mean household income growth of 7.7% between 2009 to 2012, wealth factor from rising asset prices, and the government cash assistance,” says Goh in her report.

Meanwhile, economists say there could be another round of subsidy rationalisation, which is the either the trimming of fuel subsidies or a new fuel subsidy scheme when Budget 2015 is announced on Oct 1.

“If the policy materialises, consumer prices may likely pick up again,” says AllianceDBS economist Manokaran Mottain in a note to clients.

Inflation increased sharply after the Government cut subsidies, raising the prices of fuel, electricity and sugar.

From January to July 2014, inflation rose on average of 3.3%, from 1.7% in the corresponding period last year.

“The elevated prices were on the back of the fuel subsidy rationalisation in September 2013 and power tariff hikes in January and May,” Manokaran says.

Bank Negara said it expected inflation to remain between 3% and 4%, but the implementation of the GST next year would push up the inflation rate temporarily.

Tan expects private consumption to increase before the goods and services tax (GST) comes into effect on April 1, 2015.

“With GST to commence in April 2015, the rise in retail spending will be even more obvious starting from the last quarter of this year, especially for high-value consumer goods and big-ticket items.

“For those who plan to buy luxury fashion items, jewellery, cars, computers, cameras, mobile phones, home appliances, home electrical and electronics as well as furniture and furnishings next year, they will start buy starting from end of this year in anticipation of higher prices of these items after April 2015,” he explains.

He adds that traditionally, November and December are a period when consumers are willing to spend more as there are school holidays, Christmas celebration, New Year celebration and, nation-wide retail sales promotion.

“Based on the experiences of other countries that have introduces GST, the introduction of the tax in Malaysia may result in higher private consumption expenditure as households bring forward their consumption before GST is implemented,” Goh says.

“We conclude that the impact of the GST on inflation will be largely one-off. The consumer price indices of other countries like Singapore, Indonesia and Canada,” she adds.

She forecasts that there would be a temporary spike in inflation to above 4% in second quarter and third quarter of 2Q15 after GST implementation in April 2015.

“We expect inflation to moderate in the fourth quarter of 2015 onward,” she says.