will showcase some of its top-notch property projects during the Star Property Fair 2014 at the Setia City Convention Centre, Shah Alam, from May 31 to June 1.

The group will also feature its Tropicana 218 Macalister in Penang, Tropicana Cheras in Sungai Long and the pool villas at the Tropicana Indah Resort Homes, Petaling Jaya.

On the progress of Tropicana Metropark, marketing and sales executive director Pamela Loh said the successful take-up rate of the project had prompted Tropicana to launch its second and final block of the RM465mil Paloma Serviced Residences.

She pointed out that so far, over 98% of the 30-storey Tower B of Paloma Serviced Residences had been snapped up.

The newly-launched Tower A with a gross development value (GDV) of RM465mil caters to all market segments. It features studios ranging between 609 sq ft and 1,309 sq ft, two and three-bedroom units of 916 sq ft and 1,306 sq ft respectively, as well as Courtyard Villas that comprise 2,400 sq ft to 2,599 sq ft with 4+1-bedroom units priced from RM800 per sq ft onwards.

The Pandora Serviced Residences, the first phase of Tropicana Metropark launched last year, similarly, had a take-up rate of 90%. With a GDV of RM365mil, the 627-unit development offered studios, two and three-bedroom units in two residential towers ranging from 600 to 1,200 sq ft.

Connected to a network of highways including the Damansara-Puchong Expressway and New Klang Valley Expressway, a new RM106mil flyover will also link the development to the Federal Highway.

The construction of the flyover will begin in the second quarter this year and slated for completion in 2016.

She added: “Our developments such as Tropicana Metropark essentially encapsulates Tropicana’s overall development DNA, one that is built on the cornerstones of accessibility, connectivity, innovative concepts and designs, generous open spaces, amenities, facilities, multi-tiered security and quality.” 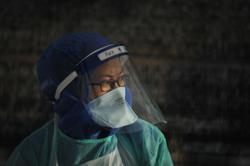 Are you a Covid-19 frontliner? You could be eligible for Digi’s new postpaid bundle