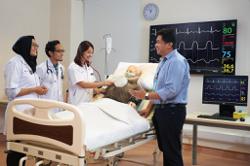 “This may be a small matter, but I’m certainly concerned about this trend… it adds to the existing signs of deteriorating level of English in our country,” says Lourdes, whose two teenaged daughters are currently attending a national school in Petaling Jaya.

“Are our schools teaching our kids the right thing so that they can do well in their future undertakings?” Lourdes asks.

Lourdes’ concern is shared by Emilia Yusoff, who over the week accompanied her son to an orientation programme for new Form 1 students in a national school in Petaling Jaya.

“Every parent would want their child to receive the best education so that they can succeed later in life… but the question is whether our education system is doing that – my worry is it is not,” Emilia argues.

“I hope that more can be done to improve the quality of our education system and stem the decline,” she says.

As the new school session starts, parents are once again reminded of the state of Malaysia’s education system. Indeed, the matter has long been a concern of many parents, with those who could afford it resorting to enrolling their children in alternative programmes that are relatively more expensive, but perceivably have better quality, in the country.

A recent report by the World Bank reiterated that the quality of education in Malaysia has simply not kept pace with the country’s economic development – a fact that even local policymakers concede. This is evidenced in the poor performance of Malaysian students in the Programme for International Student Assessment (PISA).

Developed by the Organisation for Economic Co-operation and Development (OECD), PISA is an international assessment that measures 15-year-old students’ skills and knowledge in reading, mathematics and science literacy.

In the 2012 assessment, Malaysian students were found to have underperformed all other East Asian countries except Indonesia. Performance of Malaysians students in key areas, including the command of English language, also seemed to be deteriorating.

“The quality of cognitive skills of Malaysian students, as measured by standardised international tests, is not on par with the country’s aspirations to become a high-income economy,” the World Bank says, adding that the PISA results suggest that “schooling is not translating into learning”.

“While school enrolment among 15-year olds in Malaysia is broadly similar to advanced economies in the region, quality gaps mean that schooling is not translating into higher levels of human capital,” the global financial institution explains.

The World Bank notes that while access to education at both primary and secondary levels in Malaysia is not a problem, the country lags a “high-performing” system that can produce the necessary talent and skills to fill high-skilled jobs and propel the country’s economy in line with its ambition to become a high-income nation by 2020.

A high-income nation based on World Bank’s definition is one with a gross national income (GNI) per capita of more than US$12,615 as at 2012. With a GNI per capita of US$9,820 as at 2012, Malaysia is currently ranked as an upper-middle income economy.

According to the World Bank, while Malaysia is not short of teachers, there are significant concerns about their quality, even as recent studies have identified a lack of qualified teachers as the top constraint in the country’s education system.

A Teaching and Learning International Survey in 2009, for instance, found that 46% of school principals in the country considered a lack of qualified teaching staff as a major constraint. Even the Education Ministry had admitted that in recent years, some candidates enrolling in teacher training institutions did not meet the minimum requirements of academic achievement at the secondary level.

“Access to schooling is a necessary, but insufficient, condition for building human capital that will propel economic growth. In addition to ensuring the system has the broadest possible coverage, the quality of education is perhaps even more critical,” World Bank notes.

“The quality of education can be summarised as the extent to which students are actually acquiring the cognitive and non-cognitive skills that are required for social and economic development,” it explains.

According to the World Bank, Malaysia needs to have a “high-performing” education system that is able to develop the country’s human capital to meet the changing demands of the marketplace. As it stands, employers continue to report large deficits in skills among Malaysian graduates.

Undoubtedly, quality education is a key driver to transform Malaysia’s economy into a high-income nation, and ensure sustainable growth over the long term. As the World Bank puts it, a nation’s human capital, which is largely built by its education system, is a fundamental driver of economic growth.

“There is an urgent need to transform Malaysia’s education system so that it produces the quality graduates required by a high-income economy,” World Bank argues.

“Malaysia’s performance in international tests is sobering, and the government is to be commended for benchmarking the country and as such helping to create the consensus for change. The challenge now is to seize the momentum to implement structural changes,” it says.

Last September, the Government launched the Malaysia Education Blueprint (2013-2025) with the aim of reforming the country’s education system. That is a welcomed development, as the blueprint has listed a comprehensive list of challenges faced by the country’s education system and proposed thoughtful and wide-ranging solutions as well as established clear performance benchmarks to measure progress of the proposed reform measures.

But according to the World Bank, initiatives in the Blueprint can be further refined by, among others, moving towards school-based decision-making. This involves spelling out the transformed roles and responsibilities of the federal government, school districts and schools with respect to hiring teachers and determining salaries; formulating and allocating the school budget; and choosing the curriculum.

The Government should also focus on improving parental involvement and enhancing accountability by systematically providing school-level information on performance, and on the use of human, financial and physical resources to allow stakeholders to hold school management and local leadership accountable for delivering a quality education.

In addition, the Government should also look at improving incentives and recruitment for teachers such as by proposing measures for attracting new qualified teacher recruits and promoting professional development and career management.