KWAP rising up to the challenge

RISING equity prices is a boon for investors. At Kumpulan Wang Persaraan or KWAP, the FTSE Bursa Malaysia KL Composite Index’s (FBM KLCI) 9.5% gain year-to-date lifted the fund’s asset value to above RM100bil for the first time ever.

That growing pile of money will come in handy when the pension fund is called to assist the Government in funding its bulging pension liability, which some estimates put at close to RM300bil today.

At a glance, it seems to be a massive RM200bil shortfall in funding the Government’s future pension liability. But because the civil service pension scheme is funded entirely from the Government’s coffer, the burden actually falls on future taxpayers.

Experts say the existing pension scheme needs to be reformed to avoid further stress on the already stretched public finances. Kamaruzaman is confident KWAP will perform better this year , or at least match its performance last year.

Allianz International Pensions, in a report in August, said the Government Transformation Programme (GTP) introduced in 2010 include a change to the civil service pension scheme from the current tax-financed defined benefit (DB) system into a funded defined contribution (DC) scheme.

The intended reform will reduce the Government’s future fiscal burden.

“We are preparing ourselves for that eventuality when we have to take over the Government’s pension scheme,’’ KWAP chief executive officer Wan Kamaruzaman Wan Ahmad said.

As it is, 16 consecutive years of fiscal deficits had raised concerns whether enough funds can be made available by the Government to cover for its growing future pension obligations.

This is why KWAP was set up years ago – to help the Government pay for its future pension liabilities.

KWAP traced its roots back to 1991 when the Pensions Trust Act was enacted to assist the Government in funding its pension liability with a launching grant of RM500mil.

In 2007, KWAP was established and corporatised. By that time, its fund size stood at RM48bil.

KWAP’s financial statements show that the Government contributes between RM4bil and RM5bil a year. It also gets to keep all the profit it makes to be reinvested. This compounded interest effect has enabled the fund to more than doubled its size in six years. 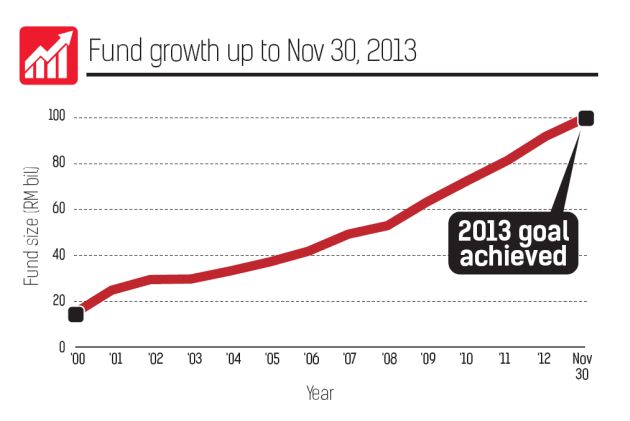 Presently KWAP is more like an asset management company than a pension fund.

Kamaruzaman, however, is quick to point out that KWAP has not lost sight of its original purpose to assist the Government in meeting future pension commitments.

To keep up with the growing pension bill, he reckons the fund must achieve a steady rate of return of at least 6% a year.

Last year, the fund’s gross return on investment was 6.84%.

Kamaruzaman is confident KWAP would perform better this year, or at least match its performance last year.

The outlook for 2014, however, is more challenging.

The bull run in the stock market, now in its fourth year since it began in earnest back in March 2009, is starting to show signs of fatigue. With the US Federal Reserve trimming down its stimulus programme, the upside potential for the local index in 2014 is limited, according to MIDF Research. The more subdued outlook for equities could take the wind out of KWAP’s recent impressive run. Bond yields, however, have moved higher in 2013 and have partially priced in tapering risk with the benchmark 10-year Malaysian Government Securities holding at above 4%.

“Equity is the kicker for us,’’ Kamaruzaman says. “But we need to look for other alternative investments to ensure returns are more sustainable.’’

The former treasury general manager at Employees Provident Fund took over the KWAP helm in May this year to succeed Datuk Azian Mohd Noh, who retired in March.

Kamaruzaman, however, did not get to enjoy his honeymoon period, as the regional markets took a huge tumble barely a month after he came on board amid worries that the US Federal Reserve will reduce its bond purchases programme sooner than expected.

By August, the stock market in Thailand had plummeted 20% from its peak, while the FBM KLCI was barely hanging on above water for the year, as foreign investors ditched shares and bonds in emerging markets to chase rising yields in developed markets.

Markets were calmer in September and sustained buying by large institutional domestic investors in the past months drove up the index to several record sessions in the past two months including to its new all-time high of 1,850 points last Tuesday.

The support provided by funds like EPF and KWAP even drew a comment from Bank Negara governor Tan Sri Dr Zeti Akhtar Aziz who earlier this week said that institutional investors would be important contributors toward stabilising the market once the US quantitative easing (QE) tapering exercise takes place.

“We recognised the fact that institutional long-term investors like us have a role to play in developing the capital market,’’ Kamaruzaman says.

Last year, KWAP invested RM1.5bil in a perpetual sukuk issued by Malaysia Airlines (MAS), which is the first sukuk in the world with no maturity period. Kamaruzaman says the fund does not own any shares in the airline, but bought the perpetual sukuk because MAS’ controlling shareholder Khazanah Nasional Bhd carries a strong credit rating.

“There is always a lot of conservatism in our investment decision,’’ Kamaruzaman says.

KWAP had lost big money before on some of its investment.

The Auditor-General, in its most recent report, chided KWAP for a taking a big hit over its huge exposure in TIME Dotcom Bhd

and its investment committee for failing to keep proper records.

“That was a wake-up call for us to improve our process,’’ Kamaruzaman says, adding that changes have been made to strengthen its investment structure and decision-making process.

“We are also looking into improving our talent management,’’ he says. 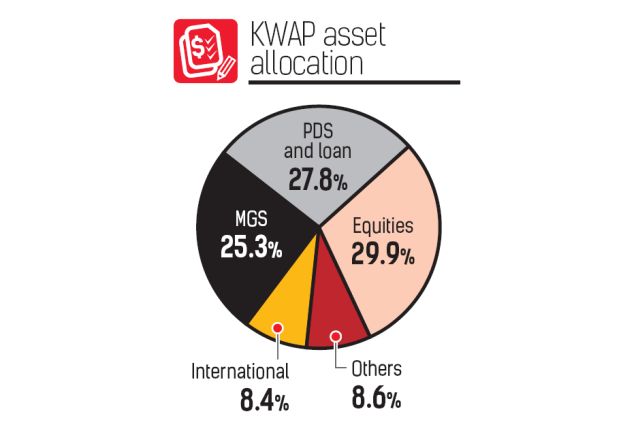 The fund had recently obtained government blessing to invest up to 19% of its assets overseas.

Critics have argued that the fund is taking on unnecessary risk by going overseas. KWAP says it needs to diversify its assets to ensure sustainable returns,

“The local market is too crowded,’’ Kamaruzman says.

There are seven major government-linked investment companies with total asset under management worth RM1 trillion and growing. EPF alone collected RM46bil in new contribution in 2012.

“There is only a limited supply of blue-chip companies in the market, which means everyone is going after the same stocks,’’ he says.

Kamaruzaman, however, believes there is still value buys in the stock market, even at current lofty levels.

“We just need to look harder,’’ he says.

In August, KWAP has allocated RM300mil to small and medium capitalised stocks on Bursa Malaysia as the fund sought to find value in fast-rising emerging companies. Currently the fund own shares in about 90 listed companies.

Kamaruzaman says the fund has equity investment overseas with a planned allocation of between 50 million euros and 100 million euros to buy shares in large European companies.

The investment will be in addition to RM1bil already invested in companies listed on the London Stock Exchange.

“There are also other types of investment that we can do within our risk appetite,’’ he says. This includes private equity investment, but that is just a “tiny portion” of the fund.

The old saying about “not putting all of your eggs in one basket” rings true when it comes to investing.

The next big thing for KWAP is the property sector.

Kamaruzaman says the investment in the property sector is expected to generate steady rental returns of between 6% and 8% a year.

This year alone, the Government will spend close to RM13bil for promised pension payments.

Under the current arrangement, the funding for civil service pension scheme came direct from government revenue.

There is no contribution from its employees, who are either directly employed by the Government, statutory bodies or local authorities. Apart from the reserves managed by KWAP, the Government pension liability is largely unfunded.

The risk is that with years of salary increases and longer life expectancy, the fiscal cost faced by future generations to take care of the public sector retired workforce could balloon further.

In 2009, the Finance Ministry and the Public Service Department undertook a Pension Liability Study to establish how KWAP can assist the Government in funding its pension liability.

The term pension liability refers to the amount of money that the Government has to account for in order to make future pension payments. It is the difference between the total amount due to retirees and the actual amount of money it has now to make those payments.

At that time it was estimated that the Government future pension commitment stood at RM260bil.

Last year, the Government raised the retirement age for its employees to 60 years to keep the lid on rising pension cost.

With its 1.4 million workforce, the public sector is one the largest employers in the country. Its pension benefits, with up to 60% monthly payment on last drawn salary and free healthcare at public hospitals, is almost unmatched by the private sector.

One thing is certain, the cost of paying for these benefits will continue to rise and reform is urgently needed to avoid further future fiscal burden.