THE spot crude palm oil (CPO) price crossed the RM2,500-per-tonne mark and soared to a new year-to-date (YTD) high of RM2,525 per tonne on Friday. The spike has sparked interest in the sector.

CIMB Research checks revealed that the optimism was caused by the expectation of weaker palm production in October.

This has eased concerns about rising palm oil stocks and boosted the buying appetite of major consumers for palm oil.

CIMB Research thinks the price improvement could be sustained, although the upside may be capped by rising competition from other edible oils and the narrowing CPO price discount to soya oil of US$145 (RM460) per tonne. Its top picks are Astra Agro, First Resources, IOI and Wilmar.

The Malaysian spot CPO price rose 3% to a new YTD high of RM2,525 per tonne on Friday. The third month futures CPO price improved 2% to RM2,598 per tonne.

The research house gathered from traders that the recent price increase was driven by concerns that the October production may be lower, falling short of market expectations.

This, coupled with a 3% month-on-month (m-o-m) rise in palm oil exports in October – based on independent cargo surveyor Societe Generale de Surveillance (SGS) report – led to short-covering on CPO and encouraged buying from consumers, who have been waiting on the sidelines in the hope that the higher stocks would drive down prices.

Assuming that Malaysian CPO production falls 1% m-o-m as exports improve by 3%, we estimate that the end-October palm oil stocks will rise to only 1.83 million tonnes or 3% below CIMB Research’s previous projection.

CPO production could start to trend lower m-o-m starting in November until February-March, while demand should remain fairly stable in view of the upcoming festive events like Chinese New Year and rising biodiesel mandates in Indonesia.

Given the above, combined with the lower palm oil stocks in key producing and consuming countries, CIMB Research believes that the improvement in CPO price could be sustained into early 2014.

This is positive for planters. CIMB Research’s key concern is that the rise in price may be capped by higher soybean supplies and rising export taxes. Among its top picks, First Resources’ and Astra Agro’s earnings will benefit the most from the rising CPO price trend.

Kimlun Corp Bhd is to propose rights issue of up to 60.1 million rights shares on the basis of one rights share for every four existing shares held, whereby each rights share will be attached with a free warrant.

The rights issue price is RM1.10 per share, representing a 40% discount to the theoretical ex-rights price of RM1.83.

The warrants will have a 10-year exercise period, whereby each warrant is entitled to exchange for a new Kimlun share based on an indicative exercise price of RM1.77. The entire exercise is expected to be completed by the first quarter of calendar year 2014.

HLIB Research is positive on this exercise to recapitalise its balance sheet in order to facilitate Kimlun’s expansion plans instead of relying on borrowings for funding.

The exercise will raise RM66.1mil (not including potential cash raised from warrants). 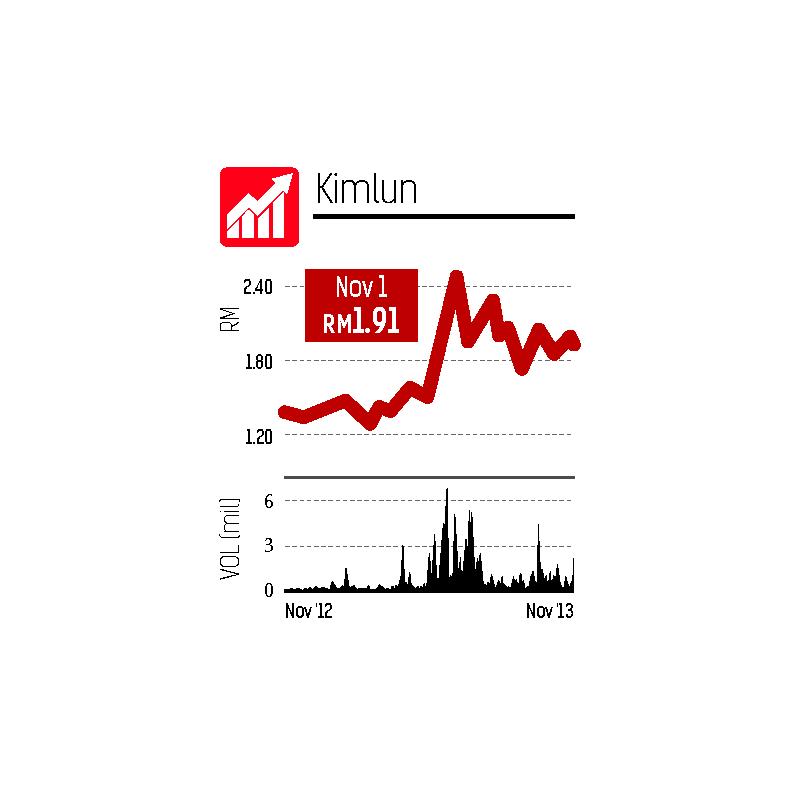 Back-of-the-envelope calculation suggests that our financial year 2014 (FY14) and FY15 earnings per share forecasts will be reduced by 20% to 20.2 sen per share and 21.7 sen pershare respectively.

Risks include execution risk, regulatory and political risks (both local and abroad), rising raw material prices and an unexpected downturn in the construction and property cycle.

Despite HLIB Research’s “hold” call, the research house recommends long-term investors to subscribe to this exercise as Kimlun will emerge stronger with a recapitalised balance sheet.

Positives are bigger-than-expected contract wins, recovery in earnings margin and contribution from the Cyberjaya property development.

Negatives include longer-than-expected gestation period of new manufacturing facilities and a sharp slowdown in the property sector, which may affect existing property-related projects.

Although consensus has rolled over their valuation to FY14 earnings (hence the higher target price or TP), HLIB Research prefers to maintain conservative by maintaining its TP of RM1.76 (theoretical ex-rights TP of RM1.63) based on unchanged 10 times FY13 earnings.

If successful, this will be the company’s second job in that country.

While we are making no changes to our forecast for now, we are optimistic that the contribution will be positive to Pestech’s financial years 2015 (FY15) and FY16 performance.

Hence, RHB Retail Research is reiterating its “buy” call, with an unchanged RM2.82 fair value (FV), pegged to a target price earnings (PE) of 10 times. This still represents a 3% dividend yield at its FV.

Pestech had a RM330mil-strong orderbook as at end-September. RHB Retail Research is in favour of the company’s robust orderbook, aggressive business expansion and growing business opportunities in the local and overseas markets.

As the MoU is for both companies to carry out feasibility studies on the potential job of 500kV transmission line, there are no details on the contract value nor execution period. Hence, it maintains its forecasts for now.

The company has once again proved that it is able to capitalise on opportunities in South-East Asia. Pestech is gradually becoming a regional player in power transmission systems.

It is reiterating its “buy” call, with an unchanged fair value of RM2.82, pegged to an unchanged target price earnings of 10 times, which still represents a yield of about 3% at FV.

RHB Retail Research likes the company’s aggressive expansion in both local and overseas businesses, with its earnings growth backed by a strong orderbook and vast growth potential in the developing countries, where there is a growing need to ramp-up electricity supply.

It involves the building of one block of 32-storey office tower and one block of 13-storey elevated car park.

The job is expected to start mid this month with a duration of 26 months to complete. Assuming a pre-tax profit margin of 7% with the completion period of two years and two months, we expect this project to contribute RM16mil (about RM2.8mil and RM8mil in financial years 2014 (FY14) and FY15 to IJM Corp’s pre-tax profit.

Prior to this job, IJM Corp’s new order book had been dry in 2013. This is its first job in 2013 and FY14, lifting its outstanding order book to an estimated RM3bil.

Budget 2014 had cited the construction of the 316km of the West Coast Expressway (WCE) and the Kuantan Port expansion. These two projects are expected to benefit IJM Corp the most. IJM Corp is the concession holders for both projects.

MIDF Research had previously assumed RM4bil in new job wins after incorporating WCE’s external job packages. It expects WCE’s jobs to be rolled out in the coming months, as WCE Sdn Bhd had closed its financials last month and will be submitting to the Government evidence of its financial capability to start work. 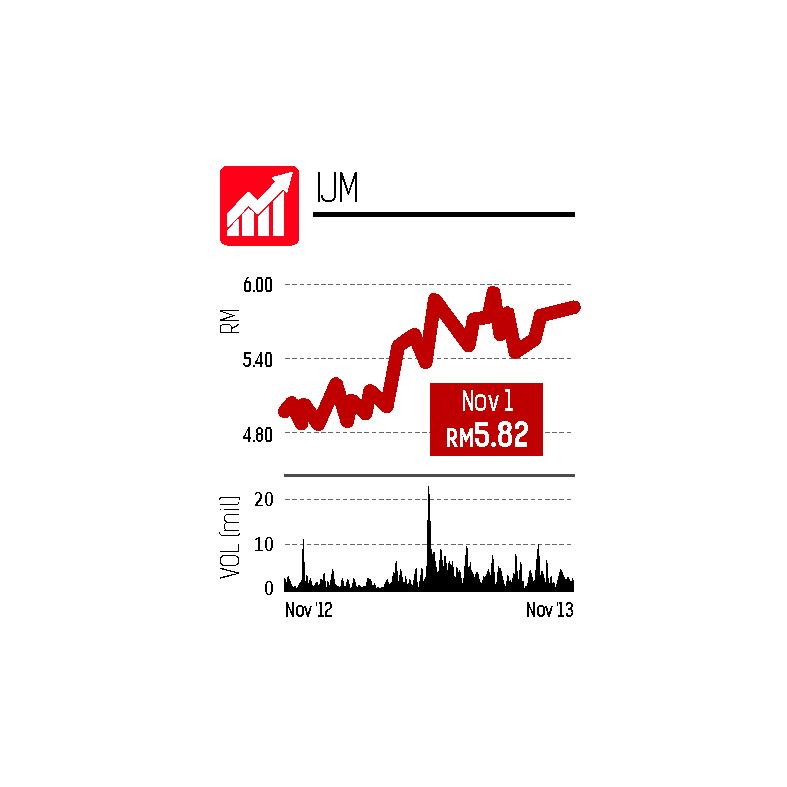 As the research house has already imputed the job wins in its forecast, it maintains its earnings’ numbers.

MIDF Research maintains its “buy” recommendation on IJM Corp although its price has risen recently and the potential upside is more than 15%. This is pending its second-quarter FY14 results, due soon.