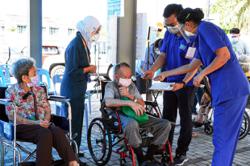 's plan to acquire the entire equity interest in Rawang Specialist Hospital Sdn Bhd (RSHSB) for RM50.6mil cash as the hospital will be the only multi-discipline private specialist hospital in Rawang.

As part of the agreement announced on Wednesday, KPJ would also be consolidating RSHSB's existing loan facility, which is estimated at RM37.5mil once fully drawn down, taking the takeover price closer to RM88mil.

“We deem the price paid for the hospital reasonable as we estimate the fair value to be about RM71mil based on recent acquisitions,” said PublicInvest Research.

The research house believes the premium was justified as KPJ will be saving on time and development cost of building a hospital from ground-up and that the hospital also has a ready line-up of doctors.

Alliance Research said the acquisition would provide KPJ with a good platform to offer its healthcare services in Rawang as the township was expected to experience a population boom, as home buyers seek more affordable housing further away from the Kuala Lumpur city centre.

It noted that numerous developers had started acquiring landbank in Rawang while new townships that had been launched had experienced encouraging take-up rates.

“Furthermore, it will not face any immediate threat from other private hospital operators in Rawang,” it said.

In its filing to Bursa Malaysia on Wednesday, KPJ said the proposed acquisition would enable the group to expand its network of hospitals, enlarge the customer base and further establish itself as a key healthcare service provider in Malaysia.

It expects to complete the acquisition by the end of the fourth quarter this year. PublicInvest said it believed that the hospital would most likely commence operations in 2014.

Although Kenanga Research is positive on the acquisition, it said the corporate development was not sufficient enough to upgrade its recommendation on the stock.

It added that the proposed acquisition would allow KPJ to operate immediately from a completed hospital building, hence avoiding the usual gestation period of three years.

Alliance believes the gestation period of the hospital will be short, as RSHSB will be operating in an underserved market.

The acquisition of the hospital will effectively bring KPJ's targeted roll-out of new hospitals to four in the financial year ending Dec 31, 2013 (FY13).

The research house said it was maintaining their earnings estimates for FY13 as the acquisition would only be completed in the fourth quarter this year.

RSHSB is currently in the final stages of constructing and developing the 159-bed specialist hospital. It expects to obtain the certificate of completion and compliance, and certificate of fitness for occupation by June this year.

RSHSB reported a net loss of RM100,000 for 2012. Alliance analysts believe this is due to the finance cost incurred from the loan undertaken to build the hospital.

The acquisition would be fully financed from internally generated funds, PublicInvest said. “Assuming the acquisition is fully paid in cash, there would still be minimum impact on KPJ's net gearing, which we estimate to increase to 0.4 times from 0.3 times in 2012.”

Meanwhile, Kenanga expects KPJ earnings over the next two years to come from the building of new hospitals as well as expanding its existing capacity and services.