US shares likely to extend rally this week

NEW YORK: SHARES are likely to extend their rally this week as investor sentiment is buoyed by a strong showing on Wall Street sparked by rising optimism over the US economy, analysts said.

Japanese and US shares have been surfing bullish waves as investors embraced news that the US jobs market and private consumption are improving, and as Tokyo's pick to head the Bank of Japan won approval Friday, stoking speculation of aggressive easing measures to jumpstart the economy.

Policymakers could boost bond-buying and other asset purchases or adopt a specific time frame for a two-percent inflation target set by the bank in January which is aimed at reversing years of falling prices, analysts said.

“Whatever the bank does it has to do fast,” said Chris Tedder, research analyst at Forex.com in Sydney.

“Investors are expecting a lot from the BoJ and if it doesn't live up to its promises then we may see a flock back to the yen, making an economic recovery in Japan ever more difficult.”

The Dow Jones Industrial Average, meanwhile, has hit repeated record highs over the past week, while the S&P 500 also flirted with an all-time high. A weaker yen has also helped lift the Tokyo market, giving a boost to shares of major exporters.

“For the time being, we expect (US shares) to continue to stand on solid ground on optimism about the economy,” Daiwa Securities said in a note.

“We expect Japanese shares to continue to stay firm for the immediate future,” it added.

Next week the market would focus on a US Federal Reserve policy meeting and housing-related data. In Japan, investors will be keeping a close eye on trade data and other figures for signs the economy was mounting a firm recovery.

“It would provide stock-buying incentives if a recovery of individual consumption, exports and land prices is confirmed,” Daiwa said.

The Tokyo market will be closed on Wednesday for a public holiday. - AFP 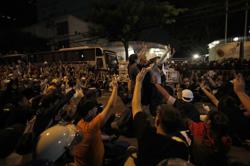