IN Malaysia, drinking a glass of milk isn't exactly considered the ideal thirst-quencher by most people.

Global events, such as World Milk Day which takes place on June 1, are good occasions that companies such as Dutch Lady Milk Industries Bhd

can leverage on to promote the benefits of milk consumption.

But as marketing director Anja Henze points out, a one-day event is sometimes just not “big enough” to inculcate milk-drinking habits.

“We usually use World Milk Day to raise awareness on the importance of drinking milk. However, it's just one day and that's not enough,” she tells StarBizWeek.

“The World Health Organisation recommends that people should have two glasses of milk a day. But Malaysians don't even have one serving of milk in a week,” she says, adding that the average Malaysian had 0.84 glass of milk in a week.

“Being the market leader in Malaysia, especially in the liquid milk segment, it is Dutch Lady's mission to increase awareness on the importance of milk consumption and to help Malaysians lead a healthier lifestyle.”

This year, Dutch Lady introduced its “Drink More Do More 2 a Day” campaign to raise awareness of and educate consumers on the nutritional benefits of milk. The aim of the campaign was basically to encourage Malaysians to consume at least two glasses of milk a day.

Henze says Dutch Lady leveraged on this year's London Olympics to promote its “2 a Day” campaign.

“We signed up with the Olympic Council of Malaysia and sponsored four athletes,” she says.

The athletes were cyclist Azizulhasni Awang, badminton doubles pair of Koo Kien Keat and Tan Boon Heong, and diver Pandalela Rinong, who did Malaysia proud by winning the bronze medal in her event.

“We also sponsored the mothers of these athletes so that they could follow them to London and watch their children compete at the Olympic games,” says Henze.

“We sponsored the mothers also as recognition on the important role that they had played in bringing up their children and making them into the athletes that they are today.”

Henze says a television commercial was done showcasing Pandalela in her youth, drinking Dutch Lady milk and “unlocking her potential.”

“It fits well in showcasing the importance of the relationship between a mother and her child. Mothers play an important role on giving their children good food, good food patterns and health.”

Henze says one of the preconditions in choosing the four athletes was that “they had to be milk drinkers in the first place.”

As an extension of this, Henze says the Malaysian public was also invited to provide “cheers” (they needed to shout “Go Malaysia Go”) in support of the contingent of the Olympic athletes as well as an attempt to break the Guinness World Record for the “Most Cheers in a Compound Crowd Recording” category. “We achieved more then 10,000 cheers and broke the record,” says Henze.

She says that Dutch Lady's “2 a Day” campaign helped boost awareness for Dutch Lady as a brand.

“It also helped to boost the nutritional knowledge of milk. We always try to show the benefits (of drinking milk), not just physically but also its mental advantages.”

In terms of sales, Henze says the campaign has boosted Dutch Lady's sales between 5% and 10% this year.

“The campaign has not ended yet but it has helped increase awareness on our brand as well as milk consumption,” she says, adding that promoting a campaign around a significant sporting event like the Olympics had its benefits.

“There is definitely a mutual gain in tying up with the Olympics. We are benefiting from the awareness of the buzz that comes out of the games. Furthermore, we also helped contribute to the Malaysian athletes as well as their mothers. It was definitely a win-win situation.”

Henze, who is from Germany, was appointed Dutch Lady's marketing director in June, a position that was previously held by Rahul Colaco, who was promoted to managing director in March this year.

Prior to her appointment, Henze was with Friesland Campina since 1995, starting off as a junior-product manager with Landliebe Basic, Sdmilch & Puddis. In 2003, she moved on to Campina Nederland as the marketing manager. She was appointed marketing director of Friesland Campina Germany in 2007.

Looking ahead, Henze says she is optimistic about the milk-drinking trends in Malaysia.

“We're seeing a growing health awareness in the country. There's also heightened awareness on the importance of consuming organic food and fresh foods and living healthily. I am convinced that dairy consumption is on the rise,” she says. 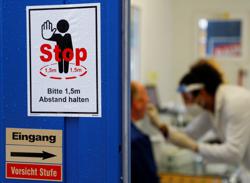