Lingering concerns about Europe's debt woes and the latest credit rating downgrade of Spain underpinned the safety of government bonds, slightly boosting the price of U.S. Treasuries in Asia on Friday while easing Asian credit markets.

China's consumer price index rose 6.1 percent in September from a year earlier, coming within expectations and lending support to views the central bank will keep interest rates on hold.

MSCI's broadest index of Asia Pacific shares outside Japan eased 0.8 percent, but was set for a weekly gain of about 4.7 percent, which would be the largest weekly increase since late March, when the index ended the week up 4.8 percent.

Materials sector led the index lower as concerns grew about weakening demand from the world's No. 2 economy, China, and the broader global economy, but oil and copper recovered earlier with losses partly on technical rebound.

"Concerns about China's demand and doubts over Europe's ability to contain the crisis are somewhat overblown," said Tetsu Emori, a fund manager at Astmax Co Ltd in Tokyo.

China's growth may slow but it will still be high with domestic demand staying solid over the mediumterm even if the pace of growth slowed, while Europe has no choice but stand by Greece, he said. "Investors have undergoing adjustments since the spring, reducing excessive positions, and I feel the markets currently stand at a juncture where players want to confirm the floor and survive the month," he said. Most analysts still expect China to grow at least 9 percent this year. The Nikkei average opened down 0.7 percent after hitting a fourweek high on Thursday. Oil prices recovered after falling on worries about slower demand in the world's secondlargest oil consumer China. Brent crude edged up 0.1 percent to $111.23 a barrel and U.S. November crude ticked up 0.01 percent to $84.24. The most active December copper contract on the Shanghai Futures Exchange edged up 0.2 percent. EUROPE EYED TOKYO, Oct 14 (Reuters) Asian shares inched down on Friday, tracking New York and European shares lower as weak Chinese trade data raised concerns about the global economy, while the euro eased after another sovereign debt ratings downgrade.

MSCI's broadest index of Asia Pacific shares outside Japan eased 0.1 percent while the Nikkei average opened down 0.5 percent after hitting a fourweek high on Thursday.

Slower demand in the world's secondlargest oil consumer China weighed on oil prices, with Brent crude easing a touch to $111.08 a barrel and U.S. November crude slipping 0.1 percent to $84.12 a barrel.

World stocks as measured by MSCI eased 0.2 percent on Thursday after six days of gains, while U.S. shares fell from threeweek highs on weak China trade data which underscored worries about the strength of global economy and the impact from the European debt crisis.

Europe is showing signs of accelerating efforts to shore up the euro zone banking sector and limit the damage from the region's spreading sovereign debt crisis, but the cost it would have to pay could pose risks to the single currency and growth.

The European Central Bank said on Thursday that forcing private bondholders to accept losses on euro zone sovereign debt could damage the reputation of the euro, hurt the bloc's banks and encourage volatility on foreign exchange markets.

The ECB's warnings were directed at the broader concept of forcing investors to take losses on euro zone bonds, and not specifically referring to the current debate on increasing previously agreed plans for a 21 percent writedown for banks holding Greek debt.

But ECB policymakers said the euro zone could fall back into recession, noting in its monthly bulletin released on Thursday that downside risks relate especially to financial market turmoil.

Downgrades of sovereign ratings continued, with the latest from ratings agency Standard and Poor's which on Friday cut the longterm credit rating of Spain by one notch.

Sovereign debt woes have put European government bond yields under pressure, with the ECB having to step into the secondary market to buy after an Italian debt auction on Thursday to cap rising yields.

In Asian credit markets, which have reflected the strain of waning confidence in the financial system, spreads on the iTraxx Asia exJapan investment grade index widened again by about 8 points early on Friday, after narrowing sharply the day before by about 17 points.

The euro edged lower in early Asian trade on Friday after the downgrade on Spain's ratings, but it still remained on track for the biggest weekly rally since January.

As investors sought relative safety, prices of U.S. Treasury debt rose, with the benchmark 10year note up 9/32 to yield 2.1798 percent late in New York on Thursday. 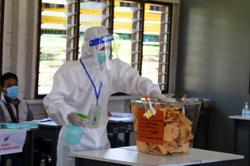