Turning sports into an economic centre

For many, sports is a recreational activity to keep fitness levels up. For the chosen ones, it’s a career which can be highly rewarding. But sports as a business? If Youth and Sports Minister Datuk Seri Ahmad Shabery Cheek were to have his way, he would like to see sports develop into an industry in the country, one that will generate economic growth while according Malaysians from all walks of life a sense of pride and achievement. StarBizWeek’s JAGDEV SINGH SIDHU and EUGENE MAHALINGAM interviewed the minister on what this entails:

What are the benefits of developing sports as an industry in Malaysia?

It is important to develop a new model to finance sports. There are two models in the world – the China model where the government sponsors everything; and the American model, where the industry is completely self-sufficient. If people think they can make money from a sports team, they will set one up.

The role of the Government is mostly to manage. In many countries, the (sports) commission plays the role of managing the sports associations so it can run by itself. Infrastructure is built by local councils for the community. Everything will be self-funded and there will be little investment from the Government.

Now, we are working towards that.

A lot needs to be done to move towards that direction, correct?

One is the right mindset. Right now people look at the salaries of our football players and they will blame the Government for that.

Look at the EPL (English Premier League) where the players are paid millions. Their salaries are paid by the clubs, not the government. But there, people are willing to pay a high price for tickets to enter the stadium. Over here, we expect it to be free or cheap.

Noh Seung-yul, who won the Malaysian Open, was a millionaire at the age of 19. Parents are now thinking if their children become engineers or doctors, they can only be millionaires at the age of 40 or 50.

Sports has become a way of making a living.

Is that prevalent here in Malaysia?

The change in mindset is taking place with new policies from the Education Ministry. One is to separate sports instead of having it as part of the general co-curriculum.

Second is the introduction of one student one sport. Maybe in future, students cannot graduate if they don’t have credit points or hours from sports like in the United States. It’s a culture in that country.

But here, if the children are not good in mathematics or science, then they drop out and get into sports. Education has to move towards a more conducive system that looks at sports as an important ingredient in terms of their achievement as students.

When you look at the potential of athletes, which sports do we have a chance to excel in?

In the sports industry we don’t focus, even though it is inter-related, on the success of athletes. For instance in England, they are successful in organising Wimbledon but who cares whether there is an English tennis champion. People will book a year ahead for their tickets at Wimbledon.

For an industry, it does not matter if results are produced or not but of course it will stimulate interest if results are there. For instance, football. We hope to produce results and we have done so lately. This has stimulated interest in the game in Malaysia. One day, people will go to the stadium because they appreciate football.

Japan has the J League which is successful. But in this part of the world, there is no comparable success, correct?

We started new and it has to be related with the media. I am pleased to note that Astro

Arena has come up with a large investment in our national league. It is important because the mass market is crucial in getting funding and sponsorship. We have to look at it from the market point of view. If there are more people watching, there will be more coverage on television and more sponsorship will come because of the return on investment.

Last time, sponsorship was looked at more as CSR (corporate social responsibility). People thought a certain portion of profit would be put aside for sports. But that model today is no more based on CSR but more as a return on investment and marketing.

We have RM6bil worth of marketing funds in the country and 10% of that, which is RM600mil, is to help support sporting events and development but we don’t tap into that. Our MSN (Malaysian Sports Council) spends less than RM200mil a year. Astro Arena came up with RM220mil which is larger than what the Government can allocate but that is, of course, for over 5 years. We cannot afford to spend so much as people will ask why we are supporting footballers when there is a need for more hospitals and schools.

That is why we need this model for private investment to come in and support sports development.

You mentioned that the size of the sports industry in Malaysia is RM30bil. Do you feel it is sufficiently large for the private sector to run the show or does the Government still have a role to play?

We still look at sports as a cost centre, rather than an investment for the government or the public to get a return on investment in the future. These are the things we need to change.

We don’t have enough data. For instance in the United States, they have data about the sporting culture. They have information of how many people walk as an exercise and from there know the size of the market for walking shoes. The same for other sports.

We have started a unit to look at this (type of data). Maybe one day that can grow to look into how through sports, we can generate income.

We also don’t have a sport habit in our census. It’s just about income or household goods but we never put what games or activities people get involved with.

Singapore tried to develop its sports industry when it started its own football league but that failed. What was the problem there and how does it relate to us?

It failed because it did not have the market. We are lucky because we have a reasonable market but that is not strong enough. That’s why one of the topics is Asean power and we have to work towards a larger Asean market. With the new TV era and so on, I propose that we have strong networking among the media so that for example when Safee Sali plays for Pelita Jaya, they can watch the game in Malaysia.

People are queuing up in front of his apartment in Indonesia and the anti-Malaysia sentiment in certain quarters there has come down as a result of him playing there.

Do you think there is a mindset change in recognising that sports can be an industry?

The fact that people are willing to buy a Malaysian jersey is a positive manner. Those days, people thought only about wearing a Chelsea, Liverpool or Manchester United jersey but these days more people are buying the Malaysian national team jersey.

That is an industry by itself and Kelantan, by introducing Red Warriors merchandise, is something that’s commendable.

Maybe it’s because of wanting more financial support that Kelantan has come out in a creative way to raise their profile. Now they have a Red Warriors cafe, just like the Manchester United restaurant. The concept of branding, which has now been embraced by one of our clubs, will surely shape the thinking of Malaysian sports as a whole.

Related Stories: The making of a sports industry Raising the profile of motorsport Playing hard to earn a living 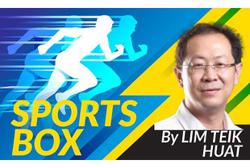