PARIS (AP) - The perennial standoff between cutting-edge designers who keep pushing men to get in touch with their feminine side and throw open their wardrobes to the skirt and reluctant male consumers worldwide flared up again on Thursday in Paris, with a man skirt and man dress-heavy collection from Rick Owens and silky, shiny offerings from Dries Van Noten.

The City of Light's five-day-long menswear displays powered into day two on Thursday after kicking off with a whimper a day earlier. Disgraced ex-Dior designer John Galliano's daylong Paris trial on racism and anti-Semitism charges - which capped a saga that has riveted the fashion world since it broke in March and he was fired from the house of Dior - threw a pall over Wednesday's shows, mostly from smaller-name labels.

But by Thursday, Paris had its mojo back. There was former Dunhill designer's African infused debut as head of men's style at luxury luggage-maker Louis Vuitton and an inside-out show at Gaultier, where half naked male models stripping to their boxers distracted from the clothes themselves.

Celebrated Belgian magpie van Noten dipped the bitter pill of femininity in a thick coating of sportswear to make it go down easier, whereas Owens - whose hallmark somber aesthetic belies his sunny Californian origins - didn't bother sugar coating the ladylike looks and served up skirts layered upon skirts and floor-length man dresses.

Though several parties were competing for the A-list attendees, the second-annual Paris amfAR dinner appeared to have sealed the deal, scoring Fergie of the Black Eyed Peas - wearing a black Vuitton ensemble so tight it literally hobbled her - Dutch design duo Viktor & Rolf and Miami Heat star Dwayne Wade. An auction at the gala, with lots including a crocodile-wrapped bottle of Piper-Heidsieck Champagne, raised tens of thousands of dollars (euros) for the Foundation for AIDS Research.

Paris menswear reaches the halfway point on Friday with shows by Paris luxury houses Yves Saint Laurent and Givenchy and the much-anticipated first menswear show by John Galliano's signature label since he was fired from the brand. The studio designed the collection, and the fashion world was holding its breath to see whether it will mimic Galliano's hallmark looks or veer into uncharted territory.

Catering to the fabulous lifestyles of the rich and famous has always been at the heart of the mission of the Paris-based luxury supernova and it remained so, despite a change of designers at the head of its menswear studio.

For his debut collection at Vuitton the new men's style director Kim Jones delivered a globe-trotting collection of slick, jet-set staples electrified by African touches that looked like they'd been plucked out of a Kinshasa market. High-waisted trousers and razor-cut jackets in navy pinstripes were paired with button-down shirts in what looked like African wax print fabric in eyepopping colors.

The collection "is about someone who, from America and England, picks up and leaves and goes slightly native," Jones, formerly of British heritage house Dunhill, said in a backstage interview with The Associated Press. "When you're really rich you can do that kind of thing."

Asked about the hardest part of his transition to Vuitton - where he replaced the outgoing head of the menswear studio, Paul Helbers, in March - Jones said it was the seemingly limitless possibilities that come with Vuitton's deep pockets.

"There's so much freedom here," said Jones. "Everything is possible at Vuitton, so it's more about deciding what not to do."

British-born Jones said he'd looked to his own childhood in Botswana and Ethiopia for the collection, which also includes sensible, hike-ready sandals and a plethora of shorts, including abbreviated tuxedo models. There was also a nod to the Boy Scouts in the khaki short suits, topped off by red and blue checkered scarves.

While the tough economy has pushed many other designers from the realm of the edgy and into the consensual, Owens continues to cater to the margins with a collection dominated by what's possibly menswear's hardest sell, the man skirt.

The raven haired, perma-tanned designer served them up in long and short iterations, layering miniskirt over miniskirt over leggings, or pairing razor-cut blazers with ankle-length skirts with bold slits up the back.

"I'm not going to sell tons of them," Owens acknowledged in a post-show interview. "But if there's anyone on the planet that can sell skirts to men, it's me.

Besides the skirts, the collection - shown in a stadium in eastern Paris that was plunged into darkness for the occasion - was dominated by floor-length tank dresses in nubby blacks, charcoal grays and khakis. With their long, elegant lines, the dresses evoked hermits wandering the desert sands.

"I like the idea of promoting dignity and wisdom," said Owens, adding that for him, the man dress - with its airs of Ancient Greece and philosophers and monks - embodies both.

It's a fair guess that many, many men might disagree with Owens on that one. But watching his models, who looked willowy and ravishing in their dresses, those present at Thursday's show couldn't help but agree.

Gaultier stripped fashion in every sense of the word, peeling off the industry's glossy exterior to reveal its less-than-glamorous inner workings and stripping the models to their boxer shorts. In theory, the display was meant to be something like the moment in Wizard of Oz when the curtain is pulled aside to reveal the hidden machinations.

But the problem with taking that approach for a fashion show, at least from the designer's perspective, is that the clothes have to fight for the audience's attention with models in various states of undress - a battle the clothes nearly always lose.

Such was the case at Gaultier, where a small army of dressers and makeup artists and stylists prepared the models on a two-story scaffolding set up at the top of what's usually the runway.

A disembodied voice read out a description of each look - old-school haute couture style - as the models alighted from the scaffolding and ambled around the showroom. They paused in front of tables specially reserved for buyers, who reached out to feel the fabrics - eyepopping Hawaiian prints, houndstooths and sailor striped knits - and jotted their orders down on special forms.

Product number tags dangled from the backs of the jackets and tuxedo trousers and from head-to-toe plaid suits topped off with matching plaid trench coats. Standout pieces included a trompe l'oeil jumpsuit that cleverly imitated a three-piece suit in robin's egg blue and another pantsuit in fabric printed with the Paris street signs for the rue Saint-Martin, where Gaultier has his headquarters.

Overall, it was a novel approach, but it had a clinical, forced feel to it lacking Gaultier's trademark joie de vivre.

"Men are always like, 'This might be too much for me, all that shiny material, can I wear that? Is it masculine enough for me?'" van Noten told Associated Press Television News in a pre-show interview. "So when you refer to sportswear then automatically ... they're more open."

Shown in a Paris parking garage, the collection hit the sweet spot between the two genders. Leather paneling toned down the shine on the slick parkas, and sporty striped sweaters added a rough edge to the slim pants in the finest of silks.

It was another brilliant showing from a designer who seems never to disappoint.

For a flagging brand looking to shake up its image a bit, the Miyake collection felt surprisingly deja vu.

The Japanese label was once on fashion's cutting edge, but after the departure of its founder and namesake it has failed to duplicate its earlier successes. In a bid make new inroads among young consumers, the brand recently replaced its last creative director with a rejuvenated design team.

Still, the new team appeared to be following the same old recipes, delivering a debut collection that served up the casual high-tech aesthetic that has become the Miyake trademark.

Their chic, easy-breezy boxy button-down shirts and cropped sarouel pants were ready for a tropical holiday, and nubby sweater vests knit with inverted rainbows looked ideal for a weekend getaway.

Yet neither the silhouettes nor the fabrics broke any new ground for the label, although Thursday's show was a tad less conceptual than in previous years. It remains to be seen whether that will prove enough to jump-start sales. - AP 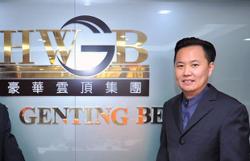