Your 10 Questions for Dr Aminuddin Adnan

KTM Bhd president Dr Aminuddin Adnan fields the 10 questions posed to him by our readers.

You have been involved in the train business in three different jobs for many years now. What is it that has kept you in this line for so long? T. Mohan, Petaling Jaya

After joining Pengurusan Lebuhraya Bhd, I was pleasantly surprised that the Renong group managed to complete the North-South Expressway 15 months ahead of schedule. I then set a personal target of managing an infrastructure project. I was prepared to learn from the best. My first exposure was with the Putra Light Rail Transit (LRT) project, where I was project general manager.

I was next given the opportunity of a lifetime to manage the construction of the Express Rail Link (ERL) project from start to finish and on to operations. The project was completed according to specifications, below budget and one week ahead of schedule. I achieved my target with great satisfaction and this is attributed to the good working relationship between the Government, project owners, project funders and the technology supplier, plus I had a professional project team behind me.

What keeps me going is that I have been involved in and have managed mega infrastructure projects worth more than RM10bil. They are directly related to my area of expertise in civil, highway, traffic and transportation engineering.

What are the key things you have learnt in your previous jobs at the Renong group and Express Rail Link Sdn Bhd? Mark Teh, Kuala Lumpur

I had the privilege of being with a group that was doing several mega infrastructure projects at that time, such as the North-South Expressway, Second Crossing, Elite Expressway and Putra LRT. The key things that I have learnt are what it takes to manage large infrastructure projects from start to completion, the best structures for different types of projects, and how to avoid pitfalls of cost and time overruns. Above all, you must have a good and strong project management team. For the privatisation of the rail industry to be successful, it has to be structured correctly based on experiences in Malaysia and other countries.

What is KTMB’s plan to improve its passenger service, especially during peak hours? Uthayakumar, Sri Damansara

The key thing is to have sufficient trains to meet the demand. At the moment, we don’t have that. We have ordered 38 EMU train-sets with six cars (current train-set is three cars) and these are expected to be delivered in the first half of 2012. This will triple the basic capacity of the commuter trains.

Second, we will upgrade the congested line around KL Sentral as this has caused serious delays to commuter operations. There is also a long-term plan to relief the passenger line from the cargo line by building a new bypass around KL. With these, we target to gradually improve our frequency from every 30 minutes to 20 minutes and eventually to 10 minutes. With the additional capacity and higher frequency, we should be able to cater for more than 500,000 passengers per day compared with the current capacity of only 100,000.

KTMB has come up with some maintenance options, including refurbishment of existing EMU sets. We will set up a new maintenance team for the new EMUs so that they will be maintained according to the best practices in the industry. We will also train our customer service staff on customer care practice. The automatic fare collection system will be upgraded so that transactions at the entry/exit gates will be faster by using a smartcard system.

What will KTMB do with its land bank, which is widely regarded as among the country’s largest and most valuable? Munirah Said, Damansara

There are only a few pieces of land left in prime locations. We are exploring new avenues to capitalise on our land bank. In some areas, we are looking at urban renewal and commercial development. One approach is to form joint ventures with good and reputable developers, based on innovative concepts to capitalise on the strategic locations.

What’s your view on the idea that privatisation will resolve most of KTMB’s problems? Khalid M, Kuala Lumpur

Having said that, I believe privatisation is good. Currently, due to insufficient rolling stock, KTMB’s infrastructure is not fully optimised. Bringing in another operator that is willing to invest in rolling stock and share part of the energy, operation and maintenance costs is a positive move as well as creating a healthy competition to KTMB’s services.

If we have two airlines, MAS and AirAsia

, competing in some domestic routes, we can also have a few train operators utilising the railway lines, providing different levels of service now that we have excess track capacity with the electrified double track.

There are parties with equity, experience, culture and discipline that can contribute towards the utilisation of the railway assets. The precedence is already there with the Eastern & Oriental Express service between Singapore and Bangkok, run by a private operator that pays access charges to KTMB.

What can be done to boost the tourists’ use of trains within Malaysia? Heng Wee Kok, Cheras

One idea is to offer pre-packaged tours with the relevant tourist information and complete service from beginning to end. The packages include pick-up at the airport, rail transportation to hotels and tourists hotspots, and back to the airport. This includes collaboration with feeder buses for places without rail access. The packages are put together by either KTMB or other rail operators. A lot of airlines are already doing this with great success.

Another example would be collaboration with the tourism authority to set up tourism booths and to distribute pamphlets at railway stations. The East Line can be promoted for eco-tourism with homestay packages. Of course, another aspect would be to continue improving the train service and ensuring the trains are reliable, efficient and frequent.

What was your most memorable train ride? Carl Teh, Klang

Taking the Eurostar in 2001 from Paris to London, via the tunnel under the English Channel. From that journey, I came up with the idea that KL and Singapore should be similarly connected, with a shorter tunnel underneath the Tebrau Strait, the train travelling at 300 km/h and the journey lasting just under 90 minutes. This will definitely boost business between the two countries as this high-speed train will be attractive to foreign businesses and travellers.

What changes do you hope to see when the Land Public Transport Commission is up and running? Debbie Low, Ipoh

I hope to see a new transport policy for freight and multimodal rail transport. The rail infrastructure needs to be fully utilised to realise the high cost of investment. Moving certain goods (like bulk products, dangerous cargoes and containers) from road to rail will indirectly help ease the congestion on highways and help reduce road accidents.

This can lead to strategic saving of fossil fuel. Rail, using renewable and sustainable energy, is clean and is the way to go. It makes sense for the Government to invest further in the expansion of the rail network as it kills many birds with one stone.

Is it possible to run a railway service profitably without financial assistance from the Government? James T, Kepong

This model is already practised by the aviation industry, whereby Malaysia Airports Bhd (MAB) manages all the airports in Malaysia and charges the airlines landing fees, parking fees, etc, while passengers pay for the passenger service charge when they fly out. At the same time, MAB operates duty-free shops for additional revenue.

With some modifications, the rail industry can adopt this model. The industry is capital-intensive. However, we have not yet unleashed the potential of the investment in the rail infrastructure thus far. Therefore, the rail industry in general, particularly KTMB, needs a revamp and a new business model as it has not been operating with the right business structure all this while. Of course, this will involve changes in legislation and practices.

I believe this is they way forward for KTMB and the country. Let the rail operators focus on providing an efficient and reliable service without being burdened with the management and maintenance of the infrastructure.

Kelantan-born, New York-based haute couture fashion designer Zang Toi is one of Malaysia’s most famous exports. His clients include Eva Longoria, Sharon Stone, Fergie of The Black Eyed Peas, Melinda Gates (wife of Bill Gates of Microsoft) and Saudi princesses. Do you have a question for him? Email to 10questions@thestar.com.my 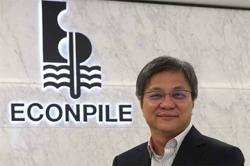