IT may be an old issue but public transport is hogging the limelight again.

A new regulator has been tasked with the ambitious plan of drawing up a well-researched masterplan for public transport in the Klang Valley and the rest of the country. At the same time, two well-known construction companies have taken the initiative to draw up a plan for a much-awaited mass transit system (MRT), which no one disputes will propel the state of public transport in the Klang Valley to new heights, if executed well.

The public are excited that for once in their lives, there could be real connectivity from home to work. But there are also concerns if such a mega project will be well planned and whether it will be too much of a strain on the Government’s resources.

Moaz Yusuf Ahmad, who runs The Association For The Improvement Of Mass Transit (Transit), a consumer association championing better public transport, says existing systems need to be made better first.

“Before we can build more light rail transit (LRT) or MRT lines, we have to solve the existing problems in the industry, such as public transport workers’ salaries and benefits, flouting of rules, dismal safety record, and above all, the ineffective and costly ‘entrepreneurial’ model for public transport, which has done little for the industry beyond enriching permit owners,” he says.

To be sure, there are already plans afoot to enhance the existing public transport systems. The recently-formed Land Public Transport Commission or SPAD has been tasked with carrying out the initiatives for the National Key Result Area (NKRA) for urban public transport under the Government Transformation Programme.

These include re-routing buses through less congested highways and even having more specialised lanes for buses. There are also plans to increase the number of trains on the existing LRT and KTM Bhd Komuter and the monorail. In addition, there are two major extensions planned for the LRT.

However, there is a view that buses and the existing rail infrastructure alone will not cater to the growing needs of public transport in the Klang Valley.

Data compiled by SPAD indicates that Klang Valley’s rail coverage still lags behind most major cities in the world, in terms of km per million population. Even if the LRT extentions are included, the Klang Valley’s rail km per million population would stand at 32 versus an average of 34 for the cities of London, New York, Singapore, Hong Kong and Tokyo.

But data extracted from the recent proposal by Gamuda Bhd

No wonder then that the 10th Malaysia Plan (10MP) specifically mentions that the public would get to enjoy an MRT system 156km long and covering a 20km radius around the Kuala Lumpur city centre, carrying two million passenger trips per day when completed.

The 10MP does not, however, state the deadline for constructing the MRT system to overcome traffic congestion and transform the “Livability of Greater Kuala Lumpur” into a global city.

Gamuda group managing director Datuk Lin Yun Ling feels that merely relying on buses will not solve the solution in the long run. “You don’t want a situation where the traffic is transferred from one road to another as that leads to more congestion somewhere else. Highway development cannot keep up with the increasing volume of cars,” he says, adding that “the country should have started this (MRT) a long time ago.”

Another key aspect of the Gamuda-MMC proposal is that it stands to unlock land values, especially so as it connects major planned property development projects. These include major land privatisation projects in the Klang Valley.

“It is a no-brainer. The MRT will bring about a positive impact on values of real estate located within walking distance of the MRT stations,” says property consultant and map-maker Ho Chin Soon.

On the flipside, there is the concern of over-development and a property glut. “What you don’t want to see is all this massive investment goes into creating new pockets of development with MRT stations nicely built up to access these places, but they end up not being used due to a possible glut of such properties,” cautions Elvin Fernandez, managing director of property valuer and consultancy firm Khong & Jaafar Sdn Bhd.

Who’s going to pay for MRT?

Another major issue with regard to the planned MRT will be funding. Reports have indicated that the Gamuda-MMC MRT project could cost RM36bil. If land acquisition, rolling stock and the redevelopment of underground commercial space are included, the figure could top RM43bil.

The question is, who will fund this?

Thus far, the 10MP has been silent on how the MRT will be funded. The Gamuda-MMC proposal, based on those familiar with it, assumes that the Government will foot the bill on the basis that the economic returns from the project are very high. (See page 22). To be noted is that public funding for MRTs is typically absorbed by the government, like in Singapore and London.

It is also worth noting that the two LRT operators had to transfer the rail lines to the government-owned Syarikat Prasarana Negara Bhd in 2002, while the monorail was transferred in 2007. The operators had found themselves in financial distress after failing to make sufficient returns on the operations to finance debts incurred during the construction as well as other operational requirements.

Still, aside from the economic benefits, there are other multiplier effects that a project like the MRT will bring about. Construction and building materials will benefit, and jobs will be created for engineers, designers, architects and the likes.

Hence it is understood that some quarters are expecting the Government to fund the MRT from the savings from reducing fuel subsidies.

But that may not be so easy, points out Yeonzon Yeow, head of research at Kenanga Investment Bank. “The idea that the Government will finance it (MRT) with savings from eliminating fuel subsidies is theoretical at best. Remember that fuel subsidies affect everyone in the country. There would be questions if you used that savings just to enhance the transport system in the Klang Valley,” Yeow says.

He adds that if the funding is raised though bonds guaranteed by the Government, it (the Government) may ultimately have to bear the burden if the project is not able to cough up sufficient cash flows from ticket sales. “Will that fit in with the Government’s austerity drive to bring the budget deficit to below 2.8% by 2015,” he asks.

The only mega rail-based private-sector driven public transport system that had not needed a major bailout is the Express Rail Link Sdn Bhd (ERL), which operates the KLIA Ekspres and and KLIA Transit train services. Its executive chairman, Datuk Mohd Nadzmi Mohd Salleh, who is also a major player in the public bus sector through his Konsortium Transnational Bhd (KTB), agrees that the MRT is a step in the right direction but that careful planning will be key.

“The structure of public transport should be better planned so that there should not be any more bailouts like in the past. Instead of spending a large sum of money on mega projects, the government should have short-term, medium-term and longer-term plans, to alleviate the congestion in the city,” he says.

At the same time, he adds, private sector involvement in the running of public transport is important. “The private players are actually best suited to bring about the necessary efficiencies and new revenue streams like exploiting advertising opportunities on the vehicles.

He says the Government cannot afford to go on subsidising public transport. “It has to be efficiently run and at the same time, it has to be attractively priced. It can be well planned so that it can get sufficient numbers using it and then the returns from ticket sales can go a long way into subsidising both the operational and capital expenditure of the new systems,” he argues.

Will SPAD get it right?

And that’s where SPAD comes in. Its officials have said they will study the MRT proposals (the one from Gamuda-MMC and any other ones that goes to the Government) and incorporate all of that if possible into its own public transport masterplan for the Klang Valley.

SPAD in fact is being tasked with revamping the entire public transport system. Besides the Klang Valley masterplan, which will be due in six months time at the earliest, SPAD will also be given the mandate to take over all licence issuing authorities, reorganise the bus network in the Klang Valley, integrate smart ticketing and monitor the overall standard performance of all public transport services, to name a few.

SPAD chairman Tan Sri Syed Hamid Albar told a news conference on Thursday that it aimed to more than double travel on public transport to 25% by end-2012 from 12% currently. “Yes, it is ambitious, but achievable. This is the first time we have a specific body to deal with the various land public transport issues,” he added.

But it is going to be an uphill task. Policy setting, operations, regulation and enforcement of public transport has been spread throughout a multitude of Government departments, agencies, including state bodies. SPAD has to not only communicate and extract data and expertise from these bodies, it also plans to usurp most of their powers. “This is going to be SPAD’s single biggest challenge, especially when it comes to the issuance of lucrative licences. Will SPAD be able to reorganise that?” questions a government official who declines to be quoted.

On a positive note, SPAD has been placed under the Prime Minister’s Office and that should give it the necessary clout to do its job well.

Overhauling the state of public transport in the Klang Valley is “not rocket science” says KTB’s Nadzmi. Adds Transit’s Moaz, “If we truly want to see public transport change over the next five years, we need a real vision for service-based public transport that puts people first, and focuses on performance. Other countries have done that, so Malaysia should be able to do it too.” 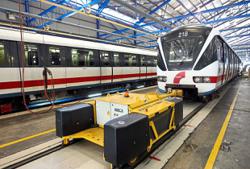