Letters to the editor

I began getting proper medical care for my diabetes with Hospital Kuala Lumpur in 2005. I had been diagnosed a diabetic a good sixteen years earlier but because of ignorance and my sickness is not covered under my company’s group insurance scheme, I did not see the need to seek proper medical attention.

After my condition was stabilised, I was asked in early 2006 to go for a stress test and an echocardiogram where I was discovered to be having some sort of blockage at stage 2. After consultations with my endocrinologist, I was immediately referred by Hospital Kuala Lumpur to see a cardiologist in IJN for which I believe I paid pretty much what anyone would pay to see a cardiologist at a private hospital (about RM100 +) for the first visit. There, I was duly informed that I would need an angiogram and stents to be inserted. All this would take one whole day and I was not required to stay overnight and I could possibly drive myself home that very same evening on the day of my procedure.

I felt comfortable with the whole matter and it was scheduled for a week after my first consultation. I proceeded to get the paperwork done and the first thing I was asked to do was deposit RM20,000 with IJN. I was shocked by the large amount required as I was under the impression that since I was referred by HKL, I would not be charged so much. I have been self-employed for the past couple of years and am not proud to say that I don’t earn enough to qualify to pay any income tax in the last few years.

I rushed back in to see my cardiologist with this piece of news and was told that I could request the welfare department to review my case and provide financial assistance. When I went to see them, I was told that to qualify for any kind of financial assistance, I would need to submit all sorts of information & documents (i.e. they were going to be very thorough to see if I qualified). And for all this aggravation, I asked how much could I possibly qualify for and the answer was RM10,000. Still no small sum when you don’t have any savings and have started to turn to your credit cards to just keep things going.

I decided to hold off and seek other solutions. As luck would have it, an old buddy of mine was and still is an associate professor in University Malaya Medical Centre (UMMC) and he wrote me a referral letter to bring to a cardiologist there.

Suffice to say, it cost me approximately RM5,700 for an angiogram, one uncoated stent and a three-day, two-night stay. I was strictly told that I MAY NOT drive myself home after being discharged. All this without having to approach any welfare department to give due consideration to my plight. I was subsequently able to make a claim from my EPF account which I have not contributed to since I became self-employed, which will probably not be enough for me when I will need it most (I turned 43 last Tuesday).

In all this time, I kept my endocrinologist from HKL updated and he in turn begun referring other patients to the cardiologist in UMMC who couldn’t afford the charges in IJN. My endocrinologist has gone on to become a cardiologist in the Serdang hospital and I am told that an angiogram and stent costs a fraction of what even UMMC charges if I ever need another one done. We laughed and I thanked him for the information.

As you can see, the only ones who really benefit from going to IJN are the civil servants, politicians, members of royalty and their dependents. For those who can afford it, there are other equally good private hospitals which charge similar or perhaps lower for the same or equivalent treatment. For people like me who slip through the holes in this nation’s social net, not everybody is as lucky as me to have the breaks I had.

So in my humble opinion, even if IJN remains in the government or the private sector succeeds in getting a slice of the action, it makes no difference as people like me who need this kind of medical care will still never be able to afford it.

Don’t bother with medical insurance companies, as they are first and foremost business entities. I know, I have tried to apply and have been rejected a couple of times. All they want are healthy people to sign up and get all that hard cash and even then, most of them will cover up to age 70 if you have no other insurance with them or age 75 if you do (my Dad’s 82 but he’s in fairly good health and most importantly, he’s a pensioner, and my mum’s covered too ... phew!!)

If you have the chance, try and view the movie Sicko by Michael Moore. Hospitals in Canada and Britain are able to provide free medical treatment to all strata of their society and the doctors who work under that scheme earn pretty healthy salaries too.

The question that’s begging to be asked is how come they can do it and we can’t?

Battle with IPPs and oversupply

(TNB) has made a so-called “smart” move by blaming the IPPs for having to pay them for the excess power and anticipated lower earnings. The excess power is actually reserve margin which any power utility has to bear, with or without IPPs.

TNB has forecast power demand of 2%, whereas the Federal Government has announced a GDP (gross domestic product) of 4%.

It should be the other way around as the power demand growth should be equal or higher than GDP. 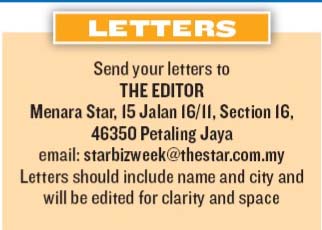 WHY should we employ a CEO who seems to be lamenting over “excess” capacity when he should be trying to make the best out of it. The IPPS are there. We cannot wish them away.

I am sure there are plenty of engineers and economists who will be able to tell us how to maximise efficient output from all our power plants without having to ask for higher tariffs.

How to become very rich in Malaysia

WHEN leaders are elected, it’s a known practice that they will choose an elite team of entrepreneurs to work with on nation-building. It will be naive to assume that everything is left to market forces and public bidding. A major part of the incentives has gone a long way to improve the nation’s infrastructure and wellbeing of its people.

Along the way, there will be hiccups. The risks that this group take have to be rewarded. What’s wrong with incentives in the form of attractive tariff, or low land cost?