These planters, being late entrants to the oil palm sector, currently have a combined mature area of about 20% or 103,678ha, unlike their counterparts in Peninsular Malaysia and Sabah with about 86% and 59% mature areas respectively.

A plantation analyst said that planters in the peninsula and Sabah had enough hectarage of profitable harvesting area to be financially independent but Sarawak planters, given their shortage of mature areas, mostly could not cover their CPO sales and high cost of production.

With the current CPO price at RM1,500 a tonne, Sarawak planters are finding it difficult to service their loans. They are also saddled with rising fertiliser and chemical prices and CPO taxes imposed by the Federal and state Governments. 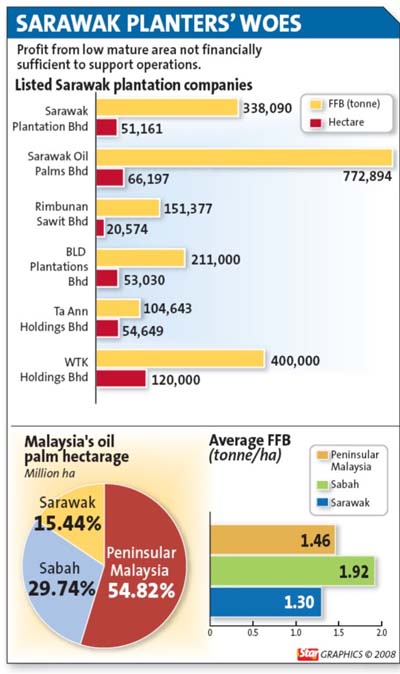 The analyst said: “For most Sarawak planters, the minimum CPO price to cover their cost of sales for the first six years of harvesting is about RM1,581 per tonne.”

He believes that many Sarawak planters would be in dire straits with the current CPO price hovering at between RM1,450 and RM1,500 per tonne.

“I estimate that it will take more than 25 years for late entrant planters, particularly in Sarawak, to recoup cumulative losses for a new plantation,” he added.

The cost of production among Sarawak planters is also the highest in the country at about RM1,800 to RM2,000 a tonne compared with about RM1,100 to RM1,200 per tonne for efficient planters in Peninsular Malaysia.

Wong said fertiliser prices had gone up three to four times while the CPO price was currently at the 2007 level.

He pointed out that Sarawak planters had appealed to the Federal and state Governments to look into their plight. 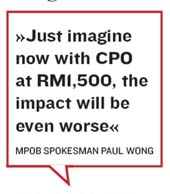 “We made an appeal two months ago, but until now, we have yet to receive any action or feedback,” he said, adding that Sarawak planters would continue to appeal.

In October, seven Sarawak-based oil palm plantation companies, which account for over 50% of the total planted oil palm acreage in Sarawak, appealed to the Federal and Sarawak governments to revise the structure of oil palm related taxes for planters.

Other proposals include a waiver on outstanding amount of Malaysian Palm Oil Board (MPOB) cess, plantation workers’ levy for Sarawak, review of the RM40 per tonne discount on CPO price for east Malaysia, discount on MPOB oil cess and subsidy for fertilisers.

The group wants the state government to give working permits to “illegal” foreign workers in plantations and a reduction in the special sales tax on CPO and palm kernel.

Its spokesman Paul Wong said in October, when CPO was trading at RM1,700 per tonne, that many Sarawak planters were bleeding. “Just imagine now with CPO at RM1,500, the impact will be even worse.”

Wong, who is Sarawak Oil Palm Bhd chief executive officer, said recently that local oil palm planters on average had to fork out up to 46% of their total earnings to pay taxes in the form of MPOB cess, windfall tax to subsidise oil palm refiners as well as other corporate income and Sarawak sales tax.