Who’s the new who’s who? 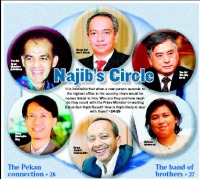 Come March, Deputy Prime Minister Datuk Seri Najib Razak will take over from Datuk Seri Abdullah Ahmad Badawi as Malaysia’s sixth Prime Minister. And that change will bring along with it some questions. How will the leadership change affect business? Who will rise to prominence and who will fade away?

A senior corporate player, who has witnessed two changes in the premiership, notes: “As in most leadership changes, some will see their political worth soar. Others will see business opportunities open up.”

Yet others, “may raid the larder and pack the bags,’’ he adds.

But business associates of Najib, if any, are not so visible.

“If you look around, there really isn’t anyone who stands out as being ultra-close to Najib in the corporate sector beyond those who have social contacts with him or his family. There is no Daim’s Peremba boys or Anwar’s MRCB boys,’’ says a source close to the PM-in-waiting. (See accompanying story)

“He’s not quite as plugged into the corporate sector that way.” The source sees this as a plus point for Najib in that “it means it can be a fresh start for everyone.”

“Everybody has a fair shot,” he says.

Since the general election in March, which saw the Barisan Nasional lose five states to the opposition, there has been a clamour for change. This makes it all the more compelling for Najib to adopt a fair-policy position. Transparency and good governance trumping all else.

“His mandate has to be fair and progressive. The stakes are very high for Najib,” an observer says.

“If he doesn’t perform, four years from now, there is no telling how brutal the (next) election could turn out to be for the ruling party. The political compulsion now is stronger than ever,” the observer adds. 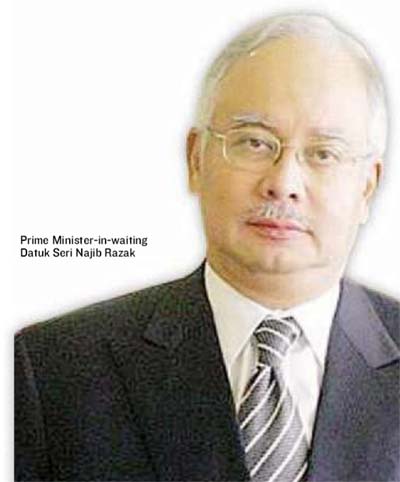 Soon after Najib was appointed Finance Minister in mid-September, a corporate roundtable session was organised. Six individuals, each with a deep knowledge of his field, were personally chosen by Najib. They were tapped for ideas on how to address issues ranging from the economy, capital markets and business in general.

● Tan Sri Md Nor Yusof. An ex-banker, he was the former managing director of Malaysia Airlines and past chairman of the Securities Commission. He is currently director and chairman of Khazanah’s executive committee;

● Datuk Mohd Nadzmi Mohd Salleh, chairman and MD of express bus operator, Konsortium Transnational Bhd. The former Proton boss was called upon by the Government in 1996 to revive the ailing public transport company;

● Datuk Shahril Shamsuddin of Sapura Group, which has interests in communications, information technology, and oil and gas;

● Datuk Mohamed Azman Yahya, director of Khazanah, and founder and group chief executive of outsourcing firm Symphony House Bhd. He is also the ex-CEO of Pengurusan Danaharta Bhd; and

All six have at one point or other played a significant advisory role in government agencies and strategic sectors. Some are still at it.

Azman Mokhtar continues to play a prominent role in the reforms of government-linked companies after instituting wide-ranging boardroom and management revamps.

Md Nor has a wealth of experience in banking and a keen insight on capital markets. Nadzmi’s expertise is in transportation, a sector that requires much reform.

Shahril is the technology and multimedia man.

Azman, an ex-banker, helped set up and headed Danaharta during the Asian financial crisis in 1997/98. He sits on several advisory panels for the development of the capital market, venture capital and public service delivery system.

And Gan was a consultant to Bank Negara, the Economic Planning Unit, finance ministry and the World Bank.

The influence these six people wield in the new administration would be worth watching.

Abdullah was a main force behind the transformation of the government-linked companies (GLCs). The PM’s political will and Azman’s stewardship injected new life into the companies. The once lumbering giants were spruced up and restructured.

What will become of the Khazanah-linked GLCs – and their captains – when Najib takes over? Will he maintain the status quo, is a question in the minds of many.

Whether Mohamed Nor will stay on as Second Finance Minister is anybody’s guess. It’s Najib’s call. But if Mohamed Nor leaves, it might be taken as a hint that Khazanah-linked companies are in for changes at the helm.

As one observer puts it: “Najib may have his own trusted lieutenants who he deems are more suited for the job, moving forward.”

Without a doubt, the spotlight next year will be on the other Razak brothers: CIMB’s Datuk Seri Nazir Razak, corporate figure Datuk Nizam Razak, Shearn Delamore & Co partner Datuk Johari Razak and architect Nazim Razak. For Nazir, in particular, given his high profile the potentially closer scrutiny could be discomforting. (See story on the Razak brothers on Page 26.)

Out of the family, a name that frequently pops up when asked who is in Najib’s milieu is Rohana Mahmood, chairman and partner of Ethos Capital, a RM200mil private equity firm. Rohana and Omar Mutapha Ong, a former special assistant to Najib, are co-founders of the boutique advisory firm Ethos & Co.

Rohana sits on the boards of Paramount Corp Bhd, TH Group Bhd and Dijaya Corp Bhd. She and another close aide of Najib, Abdul Razak Baginda, are co-founders of the independent think-tank, Malaysian Strategic Research Centre. Najib was chairman of the think-tank, now disbanded.

Omar was seen not too long ago in the finance minister’s office “just assisting a friend with some perspective,’’ as one source puts it. But speculation about Najib building a “wall of advisers” around him resulted in Omar being asked to return to Ethos.

The political rationale for Najib to distance himself from the “fourth-floor boys” syndrome is understandable. That was one of the most criticised aspects of the Abdullah administration.

Sources say Najib is not keen to have “filters” between him and the civil service. And he will likely have more direct his dealings with the business sector.

The new who’s who

Inevitably, various names will be linked with Najib. But who counts more than others will be difficult to say; some may be social acquintances, others confidantes.

chairman and chief executive Tan Sri Tan Kay Hock is among the people said to be close to Najib. They have known each other for a long time and are also golfing buddies.

Najib’s father and Malaysia’s second Prime Minister, Tun Abdul Razak, and Tun Hussein Onn, uncle and third Prime Minister, were good friends of Tan Sri Robert Kuok, their friendship going back to their school days. But there’s nothing else to infer from that, a family friend says. “When the family is in Singapore, yes, they visit the Kuoks and spend some time with ‘Uncle Kuok’.”

Sapura’s Shahril and his family are also said to be close friends of Najib. “The Shamsuddin family has persevered through many prime ministers,” a source says. And there is also a business link. Many years ago, a unit of the Sapura Group had produced portable radios for Mindef. Najib was previously Defence Minister.

. The company has a huge vehicle assembly plant – and is one of the largest employers – in Pekan, Pahang, Najib’s mainstay political base.

Here too there’s a defence link. Defence Technologies Sdn Bhd or Deftech is a DRB unit and it is the country’s leading supplier of land-based defence vehicles.

“Yes, there are common links. But it would really benefit Syed Mokhtar if Tan Sri Muhyiddin Yassin becomes the PM,” an observer says. (Muhyiddin was Johor Chief Minister when Syed Mokhtar was building his empire in the state. The two have very close ties.)

But it is understood that none are as tight with Najib as those who had journeyed with him through his early days in Umno Youth. His clique includes Datuk Seri Jamaludin Jarjis (Rompin MP and Pekan-born), Datuk Seri Shafie Apdal (National Unity, Culture, Arts and Heritage Minister), and Datuk Seri Ahmad Hamidi and Datuk Seri Mohamed Nazri Abdul Aziz (both Ministers in the Prime Minister’s Department).

“These are the chaps in his inner circle as they go back a long way,’’ a source says.

Two professional managers who have performed well in the institutions on Najib’s watch may also be poised for bigger things. They are Felda Holdings Bhd CEO Datuk Bakke Salleh and Lembaga Tabung Angkatan Tentera chief Tan Sri Lodin Wok Kamarudin. “They have performed very well and are admirable managers. There may be bigger things in store for them,” an observer says.

The most important question is how Najib intends to govern. Not many have a clue. “The DPM’s image is always managed by the PM. Historically, the PM always has some influence over the media and, hence, media management,’’ says a long-time corporate observer.

“His public persona is quite different from his real persona. I’ve been with him in big crowds and after they’ve had a chance to chat with him, they usually tell me he’s not at all how they imagined him to be.

“He’s a pretty straight forward guy ... a better technocrat than he is a politician, to tell you the truth. He is punctual and very meticulous and very disciplined,’’ says a source close to him.

The economic stabilisation package unveiled recently could serve as an indication of his administration’s likely tone. Two key elements in the package could be thematic touchstones of his leadership: the open tender for contracts that will ensure transparency and the setting up of an oversight committee to take care of execution. Some may see this as pure rhetoric, but if implemented, it will be a fresh chapter in Malaysia’s administration.