They are awaiting Govt decision to restructure payment period

INDEPENDENT power producers (IPPs) have yet to pay the levy for October and November as they are still awaiting the decision of the Finance Ministry on a proposal to restructure the payment period of the windfall profit tax.

According to Penjanabebas president Dr Philip Tan, the members have so far made payments for the months of August and September but have not paid for October and November.

Penjanabebas is the umbrella body for IPPs in the country.

The total to be paid, according to earlier reports, varies depending on how the levy is calculated and may be up to RM550mil spread over 12 months.

Dr Philip Tan: »We are holding off on thepayment till we get a response from theFinance Ministry«

Originally payable annually, the Government had discontinued the tax in September and instead, the IPPs now have to make a one-off payment equivalent to the windfall profit tax in a year.

“We put in our proposal last month for the payments to be spread over two years instead of the current one year,” Tan told StarBiz recently.

Before the repeal of the tax, Tan had in late July appealed to the Government to consider deferring the collection of the levy for a year while the IPPs deliberated on the matter with a committee comprising the Economic Planning Unit, Finance Ministry as well as Energy, Water and Communications Ministry.

“We’re holding off on the payments until we get a response from the ministry,” Tan said.

He explained that the proposal to stretch the payments over two years was to enable the IPPs to meet their debt obligations.

(TNB) because they cannot produce the required power,” Tan added.

IPPs mostly finance the construction of power plants by issuing bonds, and several had indicated previously that their junior bonds were in danger of default if the windfall tax was not restructured. 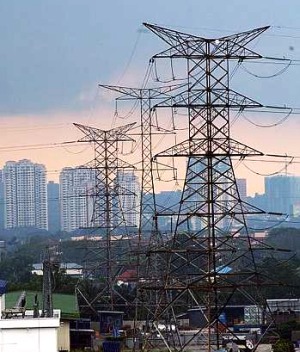 TNB power lines in Selayang. The proposal to stretch the levy payments is to enable the IPPs to meet their debt obligations

The situation is even more severe for newer IPPs as the older ones would have paid off a large portion of their debt. There are a total of RM30bil in bonds issued by IPPs in the market currently.

Meanwhile, on the proposal to extend the power purchase agreements of the first generation IPPs, which is set to expire between 2015 and 2017, OSK Research Sdn Bhd associate director Chris Eng said this might not happen.

“Unless the downturn is so severe that it frees up demand for gas, TNB has indicated that Petronas may not be willing to extend,” he said.