PETALING JAYA: Hollywood actor Bruce Willis has sued the Petra Group and its chairman, Tunku Imran Tuanku Ja’afar, to recoup US$900,000 (RM3.1mil) of the US$2mil the actor invested in a “green rubber” venture.

In his complaint filed in the federal court in Los Angeles yesterday, Willis said Petra chief executive officer Datuk Vinod B. Sekhar and Tunku Imran induced him to invest in a company that was developing a non-toxic and recyclable rubber in 2007, according to a Bloomberg report.

Willis, the star of the 1988 hit action film, Die Hard, accused the Petra Group and its executives of breach of contract and unjust enrichment.

Willis was told that former US Vice-President Al Gore and actor Mel Gibson had also invested in the company, Elastomer Technologies Ltd, the report said. In response to the suit, Vinod, who owns Petra Group, told StarBiz yesterday: “It is a minor shareholder issue and we are surprised as we already agreed to take care of it. The current market softening is making people react.’’

Efforts to call Tunku Imran were not successful.

Elastomer owns the De-link patent and Green Rubber trademark, according to Vinod.

Vinod said the name of Elastomer would be changed to Green Rubber Global.

According to the Bloomberg report, Willis had a put option, whereby for a specified period of time, he could get a full refund of his investment. Willis exercised the option, the report said.

Vinod, with a net worth of RM320mil, was named the 16th richest Malaysian for this year by Forbes.

“Gibson and Bruce Davey (a director of Green Rubber) jointly hold 7% in Elastomer and the Clinton Foundation, 2%. There are other smaller investors and Willis had less than 1% stake in the company,’’ Vinod said.

In a statement, the Petra Group said Willis contacted Vinod in 2007 asking for a chance to invest in Elastomer which was then seeking to list on the Alternative Investment Market of the London Stock Exchange.

The statement said Vinod and Gibson were good friends and since the two Hollywood stars knew each other, Vinod accepted Willis’ request.

While Willis wants his money back, Gibson was quoted in the Petra Group statement as saying: “When you make investments in companies that have the potential to have such a significant positive impact on the world, you do it for the long-term gains and not for quick return. I am in it for the long term.”

According to the group’s website, Green Rubber has a factory in Sungei Buloh, a contract manufacturing plant in Cheras, and a plant in the United States.

Vinod declined to give the profit and revenue figures for Green Rubber, which recycles waste rubber into a cost-effective rubber compound. 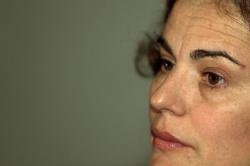