Is there bias in the reporting on Asia?

By We Have All Been Told That The US-led Financial Crisis and The Market Crash Are Due To Its Property Bubble. We Will In The Future Be Told That The Coming Bull Market Was Born In A Fear Bubble.

Given the current US-led financial crisis, these are valid questions to raise and Asians need to address them effectively. If not, the rest of the world will forever be coupled to the US economy.

Take the IMF as an example first. We know that the voting power in this international organisation is lopsided in favour of the Western economies. China’s voting power is less than Belgium and the Netherlands combined. India’s is slightly more than Australia’s.

Given the current US-led financial crisis, shouldn’t the IMF be dispensing its advice and recommendations to the affected countries like the US, Iceland, and Britain like it did to South Korea, Thailand and Indonesia in 1997?

China has always been lambasted for adopting a contradictory economic development approach of having a market economy with socialist characteristics. By nationalising their banks, even partially, are the governments in the US and Europe not engaging in the same behaviour now?

Adam Smith, the father of laissez- faire economics, had said there were times when the free market system would fail to function or the private sector would not function effectively and the government had to step in. Now we have American capitalism with Chinese characteristics.

Australia and New Zealand, with high and persistent current account deficits and low foreign exchange reserves, have higher ratings than Malaysia or South Korea (See table). Are the rating agencies being consistent?

In terms of the current account deficit, Iceland is in a league of its own. Take a look at its ratings. Iceland is just a bit lower than Malaysia. The question now is, should the rating agencies downgrade the AAA rating of the US?

The chart brings us back to the decoupling debate. For many, it would appear that the current US-led financial crisis has totally debunked the decoupling believers. South Korea and Russia seem to be in serious trouble. Singapore is already in recession.

If the emerging countries are so coupled to the US and other developed economies, as they were in the past, why are the gross domestic product (GDP) growth rates of the two economic blocs so different after 2000?

While the growth rate has decoupled, i Capital sees that the mindset and mentality of most Asians have not. A true decoupling would need this mental transformation to happen. The world economy has been in a major transition. This transformation is still ongoing. As part of this transformation, structural changes occur and a consequence of this, is great volatility.

iCapital has in the past advised that as part of the iCapital Long Boom, there will be panic, bear markets, etc. Even in a Long Boom, nothing goes up in straight line. However, once the financial dust has settled, the US-led financial crisis will see Asia and many emerging economies emerging stronger. The long-term trends are almost impossible to reverse.

The current US-led financial crisis has been well covered by the mass media. What iCapital would do is to capture the essence of the problems and solutions instead of merely repeating them.

The real culprit is not the US subprime mortgages. They alone would not be causing more than just a normal cyclical hiccup. It is the derivatives that are based on some of these mortgages that are causing the real problem. 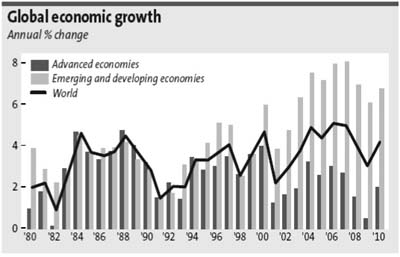 The essence of derivatives is that it allows one to leverage, i.e. with a small sum, one can trade or invest a lot more. As with all kinds of leveraging, when the house of cards tumble, they can really fall. In this case, the financial institutions are the cards that are tumbling.

And as they tumble, they lose confidence even in their own kind and put their heads in the sand instead of lending as they are supposed to. Unfortunately, a modern economy cannot function without these inappropriately incentivised institutions. The management was handsomely paid to take large risks with little penalties to themselves.

Other than oil, credit is the other bloodline of a modern economy. Once these institutions fail to function, they affect the entire economy.

Earlier on, oil became too expensive; now credit has become unavailable. This is what is happening to the US economy now. If Warren Buffett was right in saying that the US economy was in recession in March 2008, it must be in depression now.

As a democracy, the US administration really has no choice but to rescue the banking system. When the entire economy is being affected, the voters would demand that these dinosaurs be bailed out. By then, the voters would see that bailing out these financial institutions, although costing taxpayers plenty of money, is actually bailing themselves out.

The voters in Europe are demanding the same solution. When push comes to shove, forget about being ideological. “For my sake, just get the economy going.” So if the measures adopted so far do not work, there will be more to come.

However, it would appear that the total effect of the measures announced in the US and Europe would suffice to bring their heads out of the sand, albeit very gradually. Once the credit bloodline is flowing again, a more normal level of economic activity would resume. Meantime, the New York Stock Exchange would bottom out and the other markets would regain some semblance of rationality.

We have all been told that the crisis and thus the market crash are due to the US property bubble. We will in the future be told that the coming bull market was born in a fear bubble.

Besides the role played by derivatives and the impact these had on financial institutions, the other crucial factor in causing the crisis to worsen is fear. This has now reached a “bubbly” level. As with all bubbles, the fear bubble will certainly go bust. As it ballooned fast, it will go bust fast too.