KUALA LUMPUR: Not all players in the country’s power sector seem to be “sharing the burden’’ of higher fuel costs. Tenaga Nasional Bhd

(TNB) is left to fight its own battle to sustain its operations while making hefty capacity payments to the independent power producers (IPPs).

Even TNB’s shares have taken a beating, plunging 70 sen, or 8.8%, to RM7.20 the day after the Government reversed its decision for re-negotiations with the IPPs on the power purchase agreements (PPAs). Some broking houses have downgraded the stock. 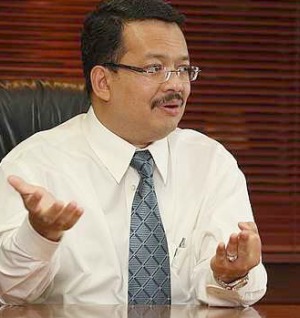 It is clear that TNB has been given the short end of the stick. While government decision reversals are not new, this one comes at a time when TNB’s fuel bill in the current financial year ending Aug 31 (FY09), is expected to more than double to RM16bil, or RM9bil more from FY08, due to higher gas and coal prices.

That is why Che Khalib needs “the IPPs to share the burden.”

“The longer they (IPPs) do not want to resolve this, the more the situation would deteriorate,’’ he told StarBiz in an interview.

An analyst said there appeared to be no expeditious mechanism to effect the IPPs’ contribution towards the higher cost of fuel following the suspension of the PPA renegotiations.

“It is not an issue of TNB versus the IPPs but it is about sharing costs. The question is how can we sit down and find ways to reduce the cost and find an equilibrium that allows all of us to stay afloat,’’ Che Khalib said.

He argued that if the IPPs were concerned about their bonds, TNB should be worried also about its RM22bil debts. Its failure to service loans would affect not just the powerhouse but the whole sector, the banking industry and the stock market (TNB being one of the top companies by market capitalisation).

“Who is going to pay them (the IPPs) the capacity payments (if we are affected financially)?” he reiterated.

According to him, the IPPs have to face reality; they cannot continue to live in a “dream world.”

With energy costs going up globally, it is a challenge not just for the developing countries but also developed countries to pay the higher fuel costs.

Analysts warned that TNB would face tough times in FY09 due to higher fuel costs, especially for coal, and the suspension in renegotiations was negative overall for TNB.

The additional RM9bil in fuel cost sis made up of gas and coal bills of about RM4bil and RM5bil respectively. While the 26% tariff hike in August helps offset the gas hike, TNB still has to find ways to fund the RM5bil in coal bills and that is a concern to Che Khalib.

The analyst said the PPA review would have reduced TNB’s capacity payment by RM600mil, equivalent to the windfall tax quantum to be levied on the IPPs. This would have helped TNB partially cushion the impact of rising generation costs.

Now TNB has to shoulder it all until a reprieve in the form of tariff review is given. The next review is in June 2009.

Will the consumers then be made to pay more in tariff hike to help the sector?

“We hope fuel costs will come down to a level that allows us to sustain ourselves. Otherwise, we would have to discuss this with the Government. The IPPs must share the burden so that we would not have to resort to the unpopular decision (of raising tariffs),’’ Che Khalib said.