The feverish pace of development in Mont' Kiara and Sri Hartamas in Kuala Lumpur is astounding.

Many new condominium, bungalow and commercial projects are turning this neighbourhood into a vibrant international community.

Although this neighbourhood had witnessed many developments over the past decade, this is probably the first time that construction of so many condominiums, bungalows and commercial projects are in full swing.

There is an “explosion” of commercial projects: the swanky Solaris Mont' Kiara (with its touristic Soho KL dining-entertainment facility and tenant Cold Storage supermarket) have been newly completed while the big Solaris Dutamas (400 shop lots, 900 office suites, 800 designer suites plus two open piazzas) and Verve Shops are nearing completion.

It will boast of a 250,000 sq ft specialised retail mall with luxury serviced residences i-Zen@Kiara 1 and i-Zen@Kiara 2 behind.

Over at Sri Hartamas is the proposed Plaza Damas 3 by the Mayland Group, opposite the Hartamas Shopping Centre.

The current spate of developments can be divided into three areas: 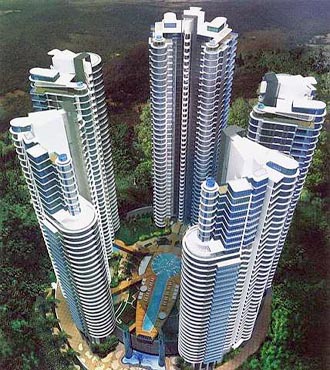 Sunrise Mont' Kiara Integrated Global Village: This is where Sunrise Bhd, the original and biggest developer in Mont' Kiara, has its flagship developments on both sides of busy Jalan Kiara 1.

Today, Sunrise is launching projects that are even more high-end in Mont' Kiara like the 10' Mont Kiara, 11 Mont' Kiara, 28 Mont' Kiara and the Mont' Kiara Meridien condominiums.

Its older condominiums (all with the words Mont' Kiara in front) include Sophia, Pines, Palma, Astana, Bayu, Aman, Bayan and Damai.

Projects by other developers have also mushroomed amidst this “global village”.

Aseana Properties is developing the Tiffani by i-Zen and Seni Mont' Kiara. Some of the earlier projects here include Almaspuri and Angkupuri condominiums and UOA Holdings's bungalow project, Villa Mont' Kiara, completed in 2004.

One end of Jalan Kiara 1 is seeing a burst of new projects including the Lumina Kiara, Sunrise's The Residence @ Mont' Kiara (2 and 3-storey bungalows), Tiffani by i-Zen (both under construction), fairly new La Grande Kiara and Wedgewood Serviced Residences.

Sunway City's high-end projects in the area include Kiara Hills, Casa Kiara 1, 2 and 3, Palazzio Sunway and the Sunway Vivaldi (with units priced from RM2.59mil to RM6.29mil!).

Mont' Kiara at Jalan Kiara 3 and 5: Several new condominiums are also coming up or completed along Jalan Kiara 3 that leads to Segambut via Kampung Segambut Dalam. 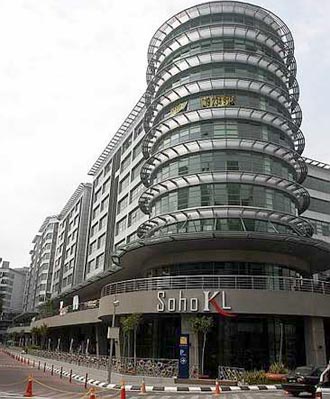 From the junction of Jalan Desa Kiara and Jalan Kiara 3 (on the right) are the Lanai Kiara, Flora Murni (by Tian Global), Vista Kiara (Asia Quest), Laman Suria (Sunrise), Ceriaan Kiara (YNH Property) and Kiara 1888 (Mitraland) while on the left are the Garden International School, Kiara Designer Suites (Sunrise) and Kiara 9 (Mitrajaya). Asia Quest's Kiaramas is on a low hill.

Behind this road is Jalan Kiara 5 where Bukit Kiara Properties Sdn Bhd's three projects, the Aman Kiara (first gated community in the area with bungalows and condovillas), Hijauan Kiara and the Verve Suites are located.

Sri Hartamas: Desa Sri Hartamas is a “hip and happening place” with lots of F & B outlets while Taman Sri Hartamas has the Hartamas Shopping Centre (Taylor's College recently opened a new campus there) and Plaza Damas shop offices (both by the Mayland Group).

Checks showed that almost all 72 units of shop offices have been sold with only six units left. There will also be 1,450 serviced apartment units.

It offers 49 residences each with its own private pools, elevator, sundeck bath, and two garages. The gated community will also have a pool house, with a 30m-sky pool and spa pool. There will be 20 limited edition villas designed by Kengo Kuma.

Adjacent to it is S. P. Setia Bhd's Duta Tropika and Duta Nusantara bungalow projects. Further down the road are the Hartamas Heights bungalow enclave and the Hartamas Regency 1 and 2 condominiums that meet up with Jalan Kiara 1.

Bukit Kiara Properties Sdn Bhd managing director N.K. Tong said Mont' Kiara is thriving because it is an “oasis of innovative developments” by a growing number of developers.

Competition is intense because of the number of developments there.

“However, each developer has found its own unique niche. This has resulted in a growing suburb that rivals KLCC in attracting foreign investment,” he said.

Although there are fears that Mont' Kiara is becoming a “concrete jungle” there are also mitigating factors like continuous improvements to the road system.