Bukit Kiara Properties Sdn Bhd's (BKP) has sold about 40% of its latest 255-unit Vogue Tower in Verve Suites that was previewed on June 21 to an exclusive group without any advertisements.

This is the third of the four-tower Verve Suites on a 5.87-acre freehold land and is BKP's third project in Mont' Kiara. The first two are the Aman Kiara and Hijauan Kiara that are fully sold and completed.

BKP managing director N. K. Tong who is pleased with the sales over four weekends said the company has over 13,000 registrants, many of whom were repeat buyers.

Although the price is higher than the 240-unit Viva Tower (first block/initial RM570 psf) and the 188-unit Vibe Tower (second block/initially RM650 psf) that were launched in 2006 and 2007 respectively, the Vogue Tower's pricing is deemed “reasonable” considering that all Verve Suites units come with top quality furnishing and fixtures including Bosch kitchen appliances.

BKP has demolished its Pavilion show gallery and moved to an even bigger show gallery with four Vogue Tower show units on the first two floors of the Verve Shops (a 60,000 sq ft of retail space for lease only) where construction had reached the roof level.

A posh show kitchen with Gaggenau (the Rolls Royce of kitchen systems) appliances for the Vibe Tower's Hypercube sky lounge is also on show at the new gallery.

The Vogue Tower also has a sky lounge like the other two towers. It's called The Garden of Concentrico on the 31st floor that provides a “Back-to-Nature” escapade with facilities like the Aqua Gym, Cinema Paradiso, Podium Panorama and Dinner Alfresco.

There will be a range of aqua exercises including water aerobics that the family will enjoy at the Aqua Gym. At the Cinema Paradiso, one can enjoy a big screen movie under a starry night setting or view the entire Mont' Kiara while lying on a hammock at the Podium Panorama. You can also dine at the Dinner Alfresco under the open sky amidst a green setting. 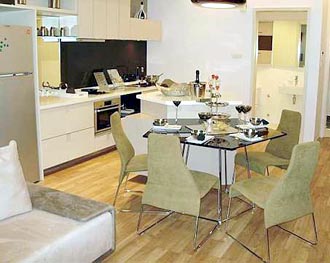 By paying only 33psf service charge (inclusive of sinking fund), Verve Suites residents can have access to all the sky lounges that are the signature selling points. Instead of having a big living space in one's unit, one can have huge and varied dining, recreational and entertainment facilities in all sky lounges including the ample facilities such as two tennis courts, squash courts, badminton court, multi-purpose hall and two swimming pools at the recreational deck below.

The third swimming pool is at the Vibe Tower's Hypercubes Lounge on the 27th floor that also boasts of its unique entertainment concept.