MMC fell sharply by 61 sen to RM2.12 a share, its lowest in 1½ years, erasing RM1.86bil of market value from the stock, a huge sum almost as much as the proposed acquisition cost for SATS. MMC's total market value was RM6.45bil at yesterday's price.

The fall in the share price occurred on a day when the market sentiment was weak, with the KL Composite Index declining by 1.7%, in line with several indices in regional markets. MMC was actively traded, with 18.5 million shares sold down.

In addition, he is stated as “connected” to a substantial shareholder of AIRB.

Following these proposed acquisitions, Syed Mokhtar would “surface” officially as a substantial owner of SATS and AIRB through his ownership in MMC.

SATS operates the Senai Airport through a concession for 50 years beginning 2003 and, through wholly-owned subsidiary Enigma Harmoni Sdn Bhd, owns 1,100ha of land near the airport.

In a note, AmResearch observed that the proposed SATS acquisition valued the airport terminal at RM600mil and its land at RM1.35bil while their net tangible assets totalled just RM64.4mil.

As Kenanga Research put it in a report, the SATS acquisition could involve “very, very long-term value realisation,” adding that SATS incurred a net loss of RM24.8mil in its latest financial year.

In this bearish market, investors are focused on current-quarter earnings and do not hold any interest for the potential of Senai Airport in its discounted cash flow value over the next 45 years or of development of its 1,100ha of land. 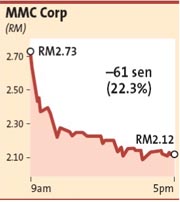 Jittery investors in these times of volatile markets, however, would not be searching for such values.

In addition, investors were also concerned about MMC's already large borrowings which totalled almost RM19bil as at end-March. This is a cause for anxiety as one of its biggest divisions, the power generation business of Malakoff Bhd, faces a windfall tax.

Although SATS would be acquired through a share swap with MMC instead of a cash payment, the latter has undertaken to advance RM417mil to Enigma Harmoni, the land owner, to repay the outstanding advances made by Semarak Restu Sdn Bhd, one of the vendors of SATS.

AIRB is the concession holder of water supply projects in Johor. Its share price declined two sen to 91 sen yesterday.