Rates: To raise or not to raise?

PETALING JAYA: Economists say any interest rate hike by Bank Negara following today's policy meeting will be carried out in response to the current inflationary pressure and to counter the negative real rate of return.

According to figures released by the Government on Wednesday, the consumer price index had risen to a 27-year high of 7.7% for the month of June largely due to the increase in fuel price and would likely stay at the same level this month following the hike in electricity tariff.

Basu said the central bank had a policy of maintaining a positive real deposit rate and would need to raise the OPR in order to maintain the policy. The OPR currently stands at 3.5% while banks' average one-year deposit rates stood at 3.70%. 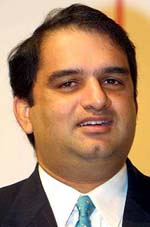 “If the market sees the country as behind the loop in containing inflation, the ringgit might weaken and this would increase the cost of imports,” he said, adding that Malaysia should not follow the path of Thailand and South Korea, which did not do enough to contain inflation.

Tan said while higher prices and the fuel price hike mainly drive inflation, other factors must also be considered to check on inflation expectations.

Kenanga Research economist Wan Suhaimie Saidi said in a research note that Bank Negara might revise the OPR upwards to 4% in the next six months with a 50% probability that there would be a 25-basis-point rate hike to 3.75% at the policy meeting. 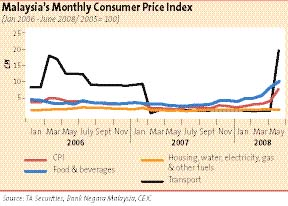 He said the upsurge in consumer prices, along with the regional rate-tightening trend, had put the central bank's pro-growth policy in a quandary and posed an increasing challenge to maintaining the current monetary policy stance.

Given the current scenario, Wan Suhaimie said policy makers might be more focused on combating inflation and wrestling with the huge negative real rate of return.

Meanwhile, AmResearch Sdn Bhd said in an economic update that interest rates were likely to be adjusted upwards in line with the international trend.

Earlier in the month, the European Central Bank had raised its benchmark refinancing rate to 4.25% following a jump in inflation to over 4% due to surging oil prices. Closer to home, the Indonesian central bank had raised interest rates by 25 basis points each month in the last three months. Other countries in the region, including India, had also raised rates recently as they grappled with inflation. 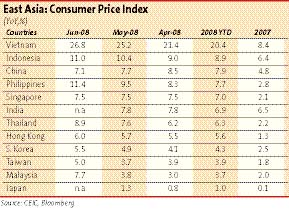 AmResearch said a gradual increase in the OPR would be expected, with a 25-basis-point hike following the August meeting and another before year-end, which would put it at 4%.