and the Principal Financial Group Inc (PFG), is targeting to raise funds for its asset management activities from countries in the Gulf Cooperation Council (GCC).

CIMB group chief executive Datuk Seri Nazir Razak said the new company, in which CIMB and PFG would have equal shares, eyed the GCC countries due to their booming oil revenues.

Iowa-based PFG has over US$300bil in assets under management globally.

“Naturally, the obvious potential source for fundraising will be the GCC countries,” Nazir told reporters after signing an agreement with PFG president and chief executive officer Larry Zimpleman for the setting up of CIMB-Principal Islamic yesterday. 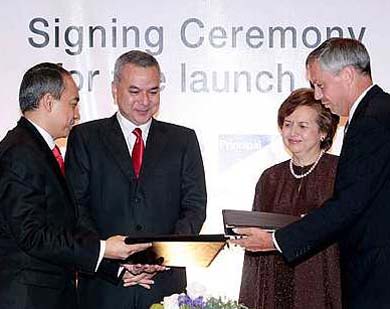 He said growth would be “very fast” and could be in double digits by year-end despite the more challenging operating conditions.

“We're transferring all the existing syariah-compliant assets from CIMB-Principal to the new company,” he said, adding that its assets under management were worth RM4.1bil, comprising mainly institutional mandates and unit trust funds from South-East Asia.

On another note, Nazir said the windfall tax imposed on independent power producers (IPPs) would have an unintended consequence for the local capital markets because power plants were funded mostly through bonds by their respective holding companies.

He had said last week that IPP-issued ringgit-denominated bonds comprised a substantial amount of the bonds issued in the country and would negatively impact future fundraising activities for infrastructure projects.

“There should ideally be a win-win situation,” he said.