THE shrinking real value of the ringgit is one of the most talked-about issues of the day.

Indeed, it was the subject of the debate between Information Minister Datuk Ahmad Shabery Cheek and PKR adviser Datuk Seri Anwar Ibrahim on Tuesday night.

The reduced value of the ringgit can be observed each time a car owner pumps petrol – he's getting much fewer millilitres for each ringgit than before. That also applies to other goods, especially food, for which consumers have to pay more nowadays.

Economists and analysts assume that consumer spending behaviour is such that following a substantial rise in inflation, consumers will spend less.

At this moment, visibility is still low as to the level of consumer spending in the current second half of the year. Up till the second quarter, consumption is believed to have continued to be robust.

In the first quarter, for instance, the services sector which principally serves consumers, was the main driver of economic growth, according to Bank Negara. Since then, conditions have changed. In the last couple of months, petrol prices have soared over 40% while food prices have also climbed at double-digit rates.

Although the headline inflation rose by 3.8% in May, according to Bank Negara's latest data, prices for food and non-alcoholic beverages rose by 8.2%. The higher petrol prices will show up in the inflation numbers from June.

Slower consumer spending will impact economic growth in which it has been a key component.

As OSK Research put it in its report “As Dark Clouds Loom”, consumer spending accounted for 53% of real gross domestic product (GDP). It has become the single biggest component of the GDP.

OSK noted that the low- to middle-income segment of consumers had a higher propensity to cut back on consumption. 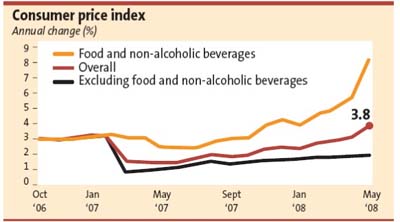 “With the fuel component making up a sizeable proportion of their disposable incomes, these consumers are likely to opt for cheaper substitutes or resort to inferior goods,” the brokerage said.

Consumer behavioural patterns will also force retailers of non-essential goods to offer discounts, which will reduce their profit margins. Furthermore, their costs have also increased.

Hence, in that report on the retail consumer this week, OSK downgraded the sector to “neutral” from “overweight”, and made deep cuts in its price targets for retail stocks.

On a similar vein in its “Malaysian Consumer” report last week, JPMorgan said consumers would be “heading back to bare necessities”.

It concluded that companies that sell discretionary goods would be the most affected while those that served staple goods and services, such as gaming and tobacco, would be least affected.

Latest NYSE, Oil and other business news from AP-Wire