PETALING JAYA: Bond market analysts do not expect Bank Negara to raise interest rates at its July 25 monetary policy meeting and see the lacklustre bond market as affected more by the topical issues of inflation and windfall tax.

At the same time, there is no doubt that falling bond prices and rising yields are spooking bond issuers and fund investors alike.

According to Aseambankers Malaysia Bhd vice-president and head of fixed income research Tan Chee Wee, the bond market continues to be lacklustre since the March 8 general election.

The high yields at present were not attractive to issuers and investors were demanding higher returns, he said.

“We are not expecting a rise in overnight policy rate (OPR, now at 3.5%) on July 25, but consumer price index numbers (an indicator of inflation) from June to December are expected to average at 7% to 8%,” he said.

Higher interest rates would result in higher yields and cheaper bonds but higher inflation would also have the same effect, he said. 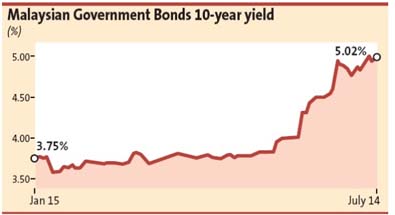 The strategy likely being adopted by fixed income funds at present was “going short on duration and to buy when yields go up to a point where they are attractive to the fund,” said Tan.

Going short on duration meant buying bonds with maturities of three years and below, because in the current uncertain environment they would have a lower market risk, he said.

Meanwhile, a chief economist told StarBiz he was also not expecting a rate rise come July 25.

“Basically, we do not expect Bank Negara to rush into a decision on interest rates,” he said.

The economist said he agreed with Bank Negara that a rise in interest rates had implications of dampening consumption.

“We are looking at the risk of stagflation (in Malaysia). So a rise in interest rates would just be making it worse,” he said.

A hike in interest rates was useful to control inflation in an overheating economy, which was not the case in the present environment, he said.

“I don’t see any possibility of Bank Negara making a rate hike this round,” he said.

On the current lacklustre bond market, he said the bond market was being affected by any number of factors and not solely the windfall tax issue or inflation.

“There is the outflow of funds back to home markets to meet subprime commitments, political news that is increasing the risk premium and the windfall tax on IPPs that is also not favourable,” he said.

Meanwhile, there was market talk that infrastructure bonds had fallen drastically in the past few weeks on concerns of windfall tax on independent power producers (IPPs) that were large bonds issuers.

While the windfall tax issue was indeed causing IPP bonds to fall, Tan believed the bulk of the fall was due to inflation concerns.

An economist at RHB Research Institute agreed that Bank Negara had sent signals that it was unlikely to raise the OPR but rising inflation and pressure on the ringgit from higher rates in the region would likely cause the central bank to raise rates later in the year.

This was necessary not to manage inflation per se but to be “ahead of the curve” so as not have sudden jumps in the interest rate later on, he said.