KUALA LUMPUR: The recent 30% windfall tax that was imposed on independent power producers (IPPs) should be reviewed because of the wider implications it will have on capital markets.

Analysts have noted that IPPs, which finance the construction of their power plants through the issuance of bonds, might see a reduced cash flow due to the payment of the tax. 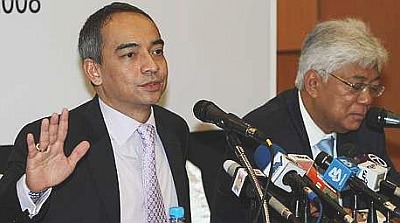 IPPs accounted for 21% of all ringgit-denominated bonds issued.

“There're no winners in this tax because bond yields have gone up, volume has come down and investor sentiments have been affected,” Nazir told reporters after Bumiputra-Commerce Holdings Bhd's (BCHB) EGM yesterday.

BCHB is the listed entity of CIMB Group.

Nazir said the implication far exceeded any money the Government could hope to raise from the tax.

He said the Government needed to deal with the windfall tax issue quickly because of its possible impact on the bond markets since Malaysia historically had the most successful bond market in the developing world.

“This tax is like shooting the goose that lays the golden eggs,” he said.

At the EGM, BCHB shareholders approved the merger of Indonesia's PT Bank Niaga TBK and PT Bank Lippo TBK. Bank Niaga is 62.5%-owned by CIMB Group while Khazanah Nasional Bhd, which has a stake in the CIMB Group, owns a 93% stake in Bank Lippo.

Nazir said the physical merger of the Indonesian banks would be completed by end-2009. “This exercise will create the fifth largest bank in Indonesia by assets and will increase CIMB Group's presence in the region,” he said.

He said shareholders of both banks would meet next Friday to discuss the proposed merger and, subject to their approvals, the CIMB Group would control 58.7% to 81.8% of the equity of the new bank, PT CIMB-Niaga.

Post-merger, the bank would have total assets of 95.2 trillion rupiah and total deposits of 78.1 trillion rupiah. It would also have more than 650 branches throughout Indonesia.

“Going forward, we want to focus on extracting value from the merger,” Nazir said.