KUALA LUMPUR: Although Australia has a strong bilateral relationship with Malaysia, it hopes to develop it to a higher level, says Australian Prime Minister Kevin Rudd.

Malaysia and Australia are also close to finalising talks with other Asean countries as well as New Zealand for a free trade agreement. 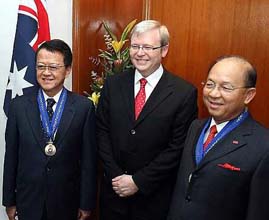