Not many cancellations of orders despite rise in fuel price

Car companies contacted by StarBiz said there was no significant rise in cancellations of car purchase orders despite the sharp fuel hike.

A Proton Holdings Bhd spokesman said there were no let-up in sales post price fuel hike and demand remained strong for its recently launched and competitively priced new Proton Saga.

s Sdn Bhd said consumer sentiments were still positive as its new sedan, Nissan Sylphy had received bookings for more than 1,000 units since it was launched last week.

Honda Malaysia Sdn Bhd also saw no significant change in car sales patterns, although a spokesman said there were customers who had changed their orders to models of lower engine capacity. 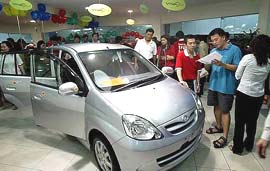 Bookings for Perodua ViVA shot up by 65% to 11,100 units last month from an average 6,700 units a month for the first five months of the year

According to a Perusahaan Otomobil Kedua Sdn Bhd (Perodua) official, bookings for Myvi continued to be strong with 8,000 units monthly during the first half of the year.

Frost & Sullivan at its recent Asean Automotive Awards named the 1.0-litre ViVA the Best Value-for-Money Model of the Year.

Analysts, meanwhile, cautioned that the fuel price hike would hit the total industry volume (TIV) in the short term.

OSK Research analyst Lim Vi Ming said a drastic fall in TIV was likely this month as a knee jerk reaction to the sudden decline in disposable income which was highly correlated with vehicle purchases and consumers choosing to prolong their cars' lifecycle and replacement time.

“However, we expect TIV to normalise quicker than in the last round of fuel price hikes and anticipate car sales to pick up by September,” he told StarBiz.

He said one reason car sales were expected to normalise quickly was consumers had more options in terms of fuel-efficient models.

A study by OSK Research revealed that a lot of consumers were switching to NGV from gasoline as the former could help them save up to 40% in fuel costs.

and Tan Chong Motor Holdings Bhd and a “trading buy” on Proton.

“We are cognisant of risk of lower TIV driven by rising fuel costs. However, recent checks with Perodua, Tan Chong and Proton revealed no slowdown in sales since the fuel price hike.

It added that delays in implementing efficient public transportation and cheap auto financing underpinned future TIV with bias towards fuel-efficient and cheaper cars.