has projects in hand with a gross development value (GDV) of RM650mil, which would keep it busy for the next five years.

Managing director Tan Boon Kang said the group was also looking for land in the Klang Valley, Penang, Perak and Terengganu to add to its land bank.

“We are looking for good land bank in these areas but have no plans to venture overseas at the moment due to global economic uncertainties,” he said after the company AGM yesterday.

The projects in the pipeline include an exclusive serviced apartment with a GDV of RM120mil in Bukit Bandaraya, Bangsar, extended low-cost apartments and shoplots with GDV of RM30mil as well as a mixed development project with a GDV of RM400mil, both in Shah Alam. 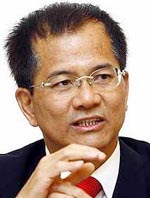 “Our Ken Bangsar project, which is expected to contribute favourably to revenue and profit, will be completed early next year,” Tan said.

Last year, the company had acquired two pieces of land in Taman Tun Dr Ismail, Kuala Lumpur, for a commercial development, which would partly be used to house its corporate office.

“We will use about 10% of the office space for our own use, while the rest would be rented out,” Tan said, adding that the development would provide long-term sustainable income and revenue in view of the growing demand for commercial space in that area.

The company also has undeveloped land in Perak and Penang.

“We have about 50 acres (in Perak) near the Lata Kinjang waterfall that is surrounded by Government-owned land,” Tan said, adding that the company was waiting to see how the new Perak government developed the land.

He also said the company planned to develop 13 “very high-end bungalows'' on 2.9 acres in Batu Ferringhi in Penang with a proposed GDV of RM60mil.

On the company’s outlook, Tan said any future projects undertaken by would be affected by rising building materials cost.

“But we would not badly affected as we do not have financing costs,'' he said, adding that the company currently had cash in hand of RM22mil.