Don: Do away with subsidies

Professor of Economics at the London School of Economics and Political Science (LSE), Danny Quah, said: “I believe Malaysians will still be able to cope if the fuel subsidy is gradually slashed by about 15% to 20% within the next six months.”

He also did not discount the possibility of Malaysia totally scrapping its fuel subsidy “one day” and retaining subsidies only on essential goods like rice and other food-based items.

“Instead, the fuel subsidy can be channelled to better usage, such as in reducing poverty, improvements in education and better public transportation,” he told reporters after his talk on The Rise and Fall of Subsidies organised by LSE Alumni Society of Malaysia yesterday. 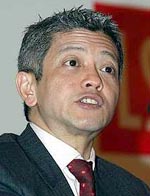 Quah said Malaysia should not continue subsidising the artificially low fuel costs as this encouraged inefficiency in the economy and hindered productivity.

In 2007, Malaysia spent RM53bil on fuel subsidies – RM33bil on diesel and petrol and RM20bil on natural gas. This year, the amount is expected to increase as crude oil hit above US$135 a barrel last week.

“Even in the US and Britain, the inflation rate has touched 18% a year.”

Quah said Malaysia's inflation should ideally be kept stable at 2%, which is also the target of most central banks worldwide.

In the short term, he said, the government realised that shocks like the removal of subsidies could easily spur inflation by 5% to 6%. “However, it will not be an on-going inflation (like what is happening now),” he added.

Malaysia's inflation rose to a 15-month high of 3% in April on higher food prices.

Quah, who was born in Malaysia but is now a British citizen, is reputed for his work in economic growth, development economics, monetary economics, macro-econometrics and recently, the weightless economy.

Recently, the Malaysian Government held discussions with Quah in the area of subsidies, particularly on fuel and measures to boost the economy.