In a statement yesterday, Nasimuddin’s widow Puan Sri Zaleha Ismail said the appointment was in accordance with the wishes of her late husband.

Nasimuddin, the founder and head of the diversified Naza Group of companies, passed away on May 1. 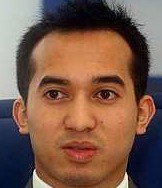 Nasarudin, 25, is believed to be one of the youngest CEOs of a privately held group estimated to be worth billions of ringgit. The group is involved in the automotive, manufacturing, property and food franchising business.

The bachelor joined his father’s company after graduating with a business economics degree from University of Southern California in the US in 2005.

Before Nasimuddin’s death, Nasarudin was CEO of Nasim Sdn Bhd, a subsidiary that holds the local Peugeot franchise.

Nasarudin has also been given the responsibility of running Naza’s food and beverage division, NZ Diners.

In an interview with StarBiz a few weeks before Nasimuddin’s death, Nasarudin said he went through management trainee programmes ”just like anyone else” although he was one of the chairman’s sons.

“There was no special treatment from my father. I had to start from the bottom like everyone else. Being his children means that his expectationof us is high.

“I had to learn everything and know the responsibilities of every department. My father wanted me to know the whole works so nobody could lie to me later on,” he had told StarBiz then.

He admitted that growing up with powerful cars from his father’s showrooms whetted his appetite for speed.

“I like to drive fast but know that there’s no point getting into an accident. Driving fast cars gives me a rush. That’s the best part of driving,” he said.

“No one is better equipped than the son to carry on the legacy left behind by the father. Nasimuddin is blessed with children who are involved in the business.

“The group can start moving forward as there is now a leader to drive the growth of the business,” he said.

“Nasimuddin was an icon in the automotive industry. He built up the Naza empire from scratch.

“It will not be easy for his successor initially but the group has a strong management team,” she added.

Meanwhile, Mercedes-Benz Malaysia president and chief executive officer Peter Honegg said: “We will continue to support the group and look forward to building on the close relationship we enjoyed with the late Tan Sri.

“We are happy that they have now appointed a successor and that the business can run as usual.”