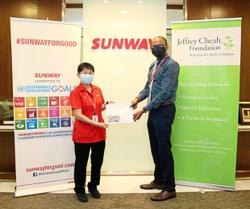 CORPORATE social responsibility (CSR) is so ingrained in the operations of The Body Shop that the two are almost inseparable.

As a retailer, The Body Shop is aware of the amount of rubbish it generates and has taken every effort to reduce the impact of such waste on the environment.

“Instead of telling customers to do this and that (protecting the environment), we decided to take the step forward ourselves,” Foong told StarBiz.

Foong said these values made The Body Shop different by carving out a niche in an industry that was notoriously fickle.

“If you want to make a difference to your business, you should incorporate all these values. I think consumers can connect with that,” she added.

With the Government and regulatory bodies pushing for companies to be more socially responsible, companies could choose from a wide range of causes to champion.

In Malaysia, The Body Shop focused its CSR activities on environment, human rights with an emphasis on women’s rights and HIV/AIDS.

“We try to champion difficult philanthropy, things that are not easy to do. Many companies can do the easy things,” said Foong, adding that she strongly and personally believed in those three causes.

“I found that many times, unless there was corporate will or unless it was embedded in the corporate DNA, causes come and go.

“Therefore, if a company wants to do CSR (in a specific cause), it had better make sure it is embedded in the corporate culture so that there is continuity when the company comes under a new leadership,” she added.

This ensured that the championing of such causes would carry on as a result of established links with non-government organisations (NGOs).

At the recent Prime Minister’s CSR Awards 2007, Rampai Niaga was recognised for its CSR initiatives in the small company CSR category. It also participated in two other categories: environment, and community and social welfare.

There were 37 other competitors for the award in the small company CSR category.

“Such relationship was built up over many years and it was not easy when we first started. We need to demonstrate sincerity and longevity. A lot of NGOs also learnt from their bitter experience of being used and discarded,” she said.

Globally, The Body Shop aims to become a carbon neutral retailer by 2010. In moving towards that direction, it has begun to measure energy consumption, how it can reduce carbon dioxide emission and then buy carbon credits.

Rampai Niaga hopes to get a grant from Pusat Tenaga Malaysia to fix solar panels in its premises this year. By linking the energy generated to the wiring system, it hopes that solar energy would meet some, if not all, of the building’s energy needs.

Foong said with the technology available, the company had to take action, instead of sitting around and waiting.

“If we are going to tell people about global warming and what they should be doing, we should take the lead,” she said, adding that businesses had a bigger moral responsibility than consumers in this respect.