says it will acquire stakes in Road Builder Holdings Bhd and RB Land Holdings Bhd, an event widely speculated in the media, including StarBiz, earlier.

In a one-paragraph statement yesterday, IJM said it requested for a trading suspension of its securities today pending announcement of a proposed material transaction of an acquisition of interests in Road Builder and RB Land.

RB Land is included in this corporate exercise as it is a public-listed subsidiary and property division of Road Builder, which owns almost 70% of the company.

In separate announcements, Road Builder and RB Land said their shares would be suspended from trading today pending IJM’s announcement. IJM will hold a press conference at 4pm when managing director Datuk Krishnan Tan will announce the acquisition proposal.

It is believed the company may make a general offer for all the shares of Road Builder and RB Land through a share swap. “I think they’ll go for a full merger with the Road Builder group,” a dealer said.

It would be a large acquisition for IJM which had a total market value of RM3.2bil. Its share price rose 10 sen to an eight-year high of RM6.45 yesterday while IJM-warrant climbed 6 sen to a record high of RM1.51.

The target companies of Road Builder had a market value of RM1.47bil and RB Land’s market value was RM290mil.

It was earlier reported that IJM might value Road Builder at RM3.00 a share as that was the highest price at which former executive vice chairman Tan Sri Chua Hock Chin sold his shares.

Road Builder announced on Oct 4 that Chua sold his 13% stake in the company and resigned from his post on the same day.

If IJM were successful in its acquisition proposal, its business base would be greatly expanded. IJM itself has businesses ranging from construction to property development, manufacture of building materials and plantations in Malaysia. In addition, it has large operating assets in construction, toll road concessions and property development overseas, especially in India.

A merger with Road Builder would combine this group’s range of businesses in construction, property development, toll roads and ports into an enlarged IJM group.

IJM is on a roll. It also has a proposal pending for the purchase of a 25% stake in Kumpulan Europlus Bhd, a construction and property development group, which has a major stake in Talam Corp Bhd, a large property developer that had faced financial difficulties.

It was announced on Monday that IJM received two letters of award from Talam to complete the remaining construction works for six of its property development projects at a cost of RM717mil, a move viewed by observers as tapping business synergies with Talam as well as lending a helping hand to the latter.

Krishnan described IJM’s role there as “a beneficiary” as a contractor at the moment, and would not be drawn into commenting on its potential role as an owner. “We will take it one step at a time,” he told StarBiz yesterday, adding that the construction works would be profitable for IJM.

Some analysts reported that IJM might face collection risks in the construction job.

The construction award, Krishnan said, was part and parcel of Talam’s debt-restructuring scheme in which “we get paid first” from the bank loans drawn down by house buyers.

In a conventional system, the money paid by house buyers would be held in a housing development account operated by the developer.

Following Talam’s debt-restructuring scheme, the sale proceeds would be ring-fenced in a special-purpose vehicle and used to pay the main contractor and loan stockholders. “We will get first bite (of the sale proceeds),” Krishnan said.

Prior to Talam’s debt-restructuring scheme, IJM could not step in to help Talam to complete construction works because “we would have just become one of the unsecured creditors,” he added.

Sale proceeds from the six projects would be forthcoming as most of the houses in those areas had been sold, he added.

Construction at virtually all of Talam’s projects will resume, now that IJM has become the principal contractor, and conversion of marketing sales into revenue will help to strengthen Talam’s balance sheet.

At the same time, with the resumption of construction, Talam is more likely to be able to obtain development orders for new projects that may be jointly undertaken with IJM. 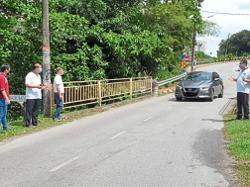