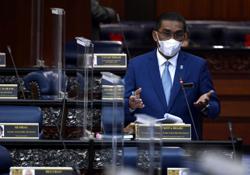 (TNB) plans to borrow up to RM700mil to fund its operational expenses for the current financial year (FY) ending August 2006. And it may need to borrow more next year if it does not get a tariff increase soon.

“We have proceeds from the sale of our Kapar plant and cash flow to take us to end-August 2006 but we would have to go for some small debts,” chief financial officer Izzaddin Idris told a media briefing in Kuala Lumpur yesterday.

TNB has not decided whether to take a loan or issue bonds but the fund-raising would not involve a cash call.

Izzaddin said that current interest rates were “pretty competitive” and TNB could take the amount it required from the RM2bil 10-year term loan offered by a financial institution at interest rates of 5.4% to 5.5%. The loan could even be structured as Islamic financing if needed, he said.

“We do not see problems borrowing as there are banks that want to lend us money, but we cannot be borrowing forever,” he said.

TNB has been around for several decades and has done well. But rising fuel prices is a concern. TNB needs RM9bil for capital expenditure this and the next financial year, or RM4.5bil each year.

The company's income is less than its expenditure, so it has to borrow to make up for the shortfall. At end-August, its total debt was RM29.9bil, of which 49.9% was in foreign currency. For FY2005, TNB reported RM18bil in sales and RM1.28bil in net profit.

While the new borrowings for the current fiscal year may be small – just enough to cover the shortfall in expenditure – 2007 could prove to be a crunch time when it may not have proceeds from assets sale to help it ride the tide. The challenge then would be managing that and rising fuel prices.

TNB hopes for a tariff increase but would the Government grant its wish? Izzaddin declined comment on when TNB could get a tariff hike but it has presented its case to the Government. The last increase was in 1997.

”Without a tariff hike, TNB’s financial position beyond August 2006 may be untenable as it has to meet RM200mil in debt repayment,” he said.

The company may need funds in FY07 and Izzaddin did not disclose how TNB would tackle that. For the current year, TNB is not going to raise fresh funds in the international debt markets but some refinancing can be expected.

TNB also has been on a cost-saving drive for over a year now. For the current fiscal year, it aims to realise cost savings of RM400mil to RM600mil from the various initiatives made. For FY05, TNB set a value-creation target of RM825mil but exceeded that with RM962mil, mainly in cost savings.

This year, the savings will come from the balance RM193mil the company would collect in diesel subsidy for its Sabah unit; over RM60mil in transmission and distribution losses; maintaining medical and overtime expenses; and cracking down on power theft and delinquent customers.

TNB also expects to sell several small pieces of land in Kuala Lumpur for about RM75mil in the coming months. It will also jointly develop 15 acres, divided into four plots, with property companies. More than 30 property developers have picked up documents in a tender bid to partner TNB in the proposed development.

The various developments are estimated to be worth RM100mil but this would not be realised immediately.

The company will also set up an e-banking platform with two financial institutions in a bid to reduce transaction costs and minimise “float money”. This effort initially is expected to save TNB about RM500,000 a month. It would involve staff salaries but would be extended to payment to suppliers and contractors as well.

High on the list was also efforts to improve customer service, said Izzaddin. He said TNB had been “fairly successful” in its cost-management drive and going forward it would continue with efforts to secure a sustainable future for the powerhouse.