Banker with a passion to help others

BANKING icon and philanthropist Tan Sri Tan Chin Tuan, who passed away on Nov 13 at the age of 98, had lived a remarkable life.

His contributions to Singapore as a banker, businessman, legislator and public benefactor, made a difference in many peoples' lives. His life and work serve as an example of diligence, dedication and generosity.

Described as the embodiment of OCBC, he steered the banking group to become one of the world’s most illustrious and wealthy banks.

In his 59 years of dedicated service, he guided the bank through war, national reconstruction, colonial withdrawal, unprecedented economic growth, technological revolution and globalisation.

He also rose rapidly in the political arena. He was the deputy president of the Legislative Council from 1951 before resigning in 1955 to dedicate himself to growing OCBC.

Tan’s foray into the banking world began in 1922, at the age of 13, when he deputised for his father, Tan Cheng Siong, who was then the general manager of the Oversea-Chinese Bank Ltd (OCB).

Cheng Siong was delayed and the young boy was entrusted with the key to the bank’s strong room to withdraw the estimated cash needed for the bank to start its daily operations.

That incident was symbolic of things to come – Tan would one day have a distinguished career in banking.

Tan’s father was a consummate banker, universally respected and admired. Tan participated in many aspects of his father’s business life, from their rubber plantation to the bank.

Going to his father’s clubs, Tan quickly learnt the manners, customs and traditions of the adult Chinese business world and rubbed shoulders with his father’s friends.

At the age of 17, Tan joined the Chinese Commercial Bank Ltd (CCB) as a clerk before rising to become its assistant manager in 1932.

Tan was made one of OCBC’s bank managers in 1933. In the war years, he was instrumental in protecting the bank’s assets.

In 1942, 33-year-old Tan was promoted to joint MD of OCBC and given the task of re-establishing the bank’s headquarters and registration in another country.

On Feb 4, he left Singapore to fulfil his mission, which was fraught with danger and finally ended with the re-establishment of OCBC in Bombay, India.

The bank also lost more than a tenth of its 280 staff killed during the occupation. Tan, who returned to Singapore in September 1945, was elected the sole MD of the bank and began the task of rehabilitating and revitalising OCBC.

Despite his position as MD, Tan drew only a salary of S$600 a month.

His reputation for fairness and integrity encouraged the staff and officers to work harmoniously together and drew old and new customers to the bank.

He showed his deep compassion by providing interest-free loans of S$500 to S$1,000 to penniless former internees. He required no collateral but only a promise to repay when they had the means to do so. The bank lent out a total of S$100,000.

His loan policy not only generated goodwill but also attracted new loyal customers.

Granting loans to old and new businesses and putting currency into circulation helped stimulate the dormant Singapore economy. In addition, OCBC not only participated in government loans but also assisted their syndication.

Tan’s familiarity with Western business practices and concepts, and his warm relationship with the British, presented him with the opportunity to extend the OCBC family by investing in almost every sector of the economy.

Between 1970 and 1973, Singapore experienced a mini-boom and the bank began to expand internationally.

These include several joint ventures with foreign banks, which helped OCBC to become a truly global player. OCBC’s presence was felt as far as Britain and Japan.

Dividends were usually in double digits and never less than 5% annually in the entire post-war period.

Tan also stamped his mark on the Singapore skyline. His “magnificent obsession”, the S$100mil OCBC Centre, was completed in September 1976.

It was the first computerised banking facility in the region. The 52-storey building celebrated the 52 years Tan has been associated with OCBC.

The imposing building, standing tall and powerful against the horizon, was the physical manifestation of the bank’s legendary motto: Solid as a rock.

His retirement gift was a 22-carat solid gold medallion, 4.5 inches in diameter and weighing 1,000gm. It bore on one side the profile of OCBC Centre and, on the other, the Chinese junk.

However, his passion burned brightest when it came to helping others.

He established the Tan Foundation to distribute funds to a wide variety of organisations, including children’s charities, education institutions, hospitals and other humanitarian associations.

This year, he donated S$29mil to the National University of Singapore, towards a wing of the new administrative centre.

Tan’s passing was a great loss to the community but his life was a life well-lived. 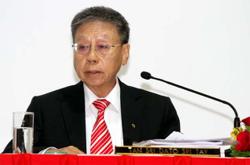