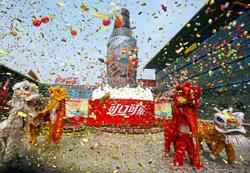 F&NCC managing director Datuk Ng Jui Sia said in a statement the contract, worth RM9mil, would give the soft drinks manufacturer exclusive rights to sell its range of drinks including Coca-Cola, 100PLUS, F&N, Season’s and Fruit Tree in all 16 GSC outlets around the country.

The largest GSC outlet is at Mid Valley Megamall in Kuala Lumpur.

“Currently F&NCC commands a 90% share of the total soft drinks sold at GSC cinemas with the Coca-Cola brand accounting for almost 50% of the total volume,” Ng said.

The partnership was in line with F&N’s plan to reach its targeted audience as GSC generally attracted young crowds and increasingly, family groups, he said, adding that the company expected a 10% annual growth in sales of soft drinks at the outlets.