“This is one of the potential operations that Telekom is looking at,” he told AFX-Asia when asked to comment on a report that the company was interested in buying AT&T Wireless Services Inc's 33.3% stake in Idea Cellular. It has been reported that expressions of interest for the stake sale are likely to be invited by the end of this month.

Idea Cellular is India's fifth largest mobile operator in which the Tata Group and Birla Group also hold a 33.3% stakes each. – AFX-Asia

Trinity Coral Sdn Bhd, owned by the Kuok family, became Transmile's single largest shareholder on March 25 when it acquired a 28.5% stake in the company from its chairman and chief executive officer Gan Boon Aun and director Khiudin Mohd.

has reported a higher pre-tax profit of RM2.33mil for the nine months to Feb 29, against RM1.18mil in the corresponding period ended Feb 28 last year.

Its revenue was also higher at RM108.87mil compared with RM90.95mil previously. – Bernama

METAL RECLAMATION BHD has registered a higher pre-tax profit of RM4.38mil for its financial year ended March 31, versus a pre-tax profit loss of RM16.72mil a year ago.

MALAYSIAN MERCHANT MARINE BHD will go “ex” on May 6 for entitlement to the shipping company's proposed bonus issue of up to 14.02 million Islamic preference shares (IPS) on the basis of one IPS for every 10 shares held.

The IPS, which are unsecured, will rank ahead of MMM's other classes of shares but behind the debt of the shipping company.

The IPS are entitled to a fixed non-cumulative preferential dividend of at least 20% above the dividend declared for holders of ordinary shares for that same year. – AFX-Asia

Loh & Loh said in a statement the sub-contract to supply and install built-in and loss furniture works was part of the RM67.29mil project to build a school secured from Perbadanan Putrajaya.

Pohmay is expected to complete the interior work before Oct 1 this year. – AFX-Asia 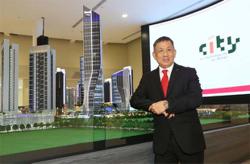