PETROLIAM Nasional Bhd plans to sell shares in a subsidiary that owns the Petronas Twin Towers, raising as much as RM700mil, according to people familiar with the situation.

They said Petronas planned to sell a quarter of its stake in KLCC Property Holdings Bhd, which owns the 88-storey towers and surrounding mall, office and hotel complex, by the end of next month.

The RM2.9bil towers are the centrepiece of the Kuala Lumpur City Centre project, started by former Prime Minister Tun Dr Mahathir Mohamad in 1992 on the former site of the Selangor Turf Club and completed in 1998. The towers have an average occupancy level of 87%, according to property manager KLCC Urusharta Sdn Bhd, while the 300-store mall is fully occupied.

“Rentals and occupancy levels are excellent,'' said Alexander Banik, who helps manage US$137bil of global assets at MEAG Munich Ergo KAG. “At least one-third of the pitch is already won by the quality of Petronas' name and assets.''

KLCC Property would sell 432 million new shares to investors at RM1.50 each, the sources said. About 92 million shares would be allotted to retail investors and 340 million to professional investors, they said.

All Asia Networks Plc raised US$534mil in October last year. So far this year, 24 companies have raised a combined RM370mil.

KLCC Property's will be the third share sale by Petronas. The national oil company, which had US$50bil of assets on Sept 30, sold shares in its petrol retailing unit Petronas Dagangan Bhd

In May 1998, Petronas signed a 15-year lease agreement for the Twin Towers at a base rate of RM245mil a year, with provision for a 3% increase in rental every three years, according to documents linked to a bond sale by Petronas unit Midciti Resources Sdn Bhd in 1999.

Petronas occupies one tower while about 73% of the second tower has been leased to tenants, including units of Microsoft Corp, IBM Corp, Mitsubishi Corp, and Siemens AG.

The six-level Suria KLCC mall, sandwiched between the towers at the base, has 139,400 sq m of floor area and 5,000 parking bays. The mall has stores operated by Gucci, Isetan of Japan and Spain's Zara clothing franchises.

Apart from the Twin Towers, KLCC Property also owns 60% of the Suria KLCC mall in a venture with Rotterdam-based Rodamco Asia NV.

Other properties within the City Centre project include the RM282mil Menara ExxonMobil, a 30-storey office tower that has been leased to the Malaysian unit of the US oil company for 20 years, and 75% of the 643-room Mandarin Oriental hotel in a venture with Jardine Matheson Holdings Ltd of Hong Kong.

Petronas also owns the fully occupied, 35-storey Dayabumi Complex that was the state oil company's headquarters between 1984 and 1997.

In preparation for the initial public offering, Petronas exercised an option to buy back 49% of the towers from its 66-year-old billionaire partner, Ananda Krishnan, in August 2002, giving it full ownership. The sale was reportedly worth RM1.2bil. – Bloomberg 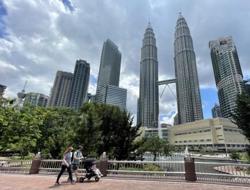 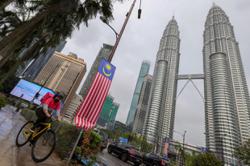