LAM SOON Edible Oils Sdn Bhd, a subsidiary of Lam Soon (M) Bhd, expects up to 10% higher sales of its cooking oil this year from RM150mil last year, amid an upturn in the cooking oil market.

Contrary to the company's earlier projections on a bleak outlook for the cooking oil market this year, it had seen sales picking up since May, said Lam Soon marketing director Kuek Bak Heng.

“We had forecast a drop in 2003 sales early this year as we expected crude palm oil (CPO) prices to come down to RM1,200 per metric tonne but it went up to RM1,500,'' Kuek told StarBiz in Shah Alam yesterday.

Lam Soon is currently the largest supplier of cooking oil in Malaysia with its flagship brand Knife garnering 40% market share in the blended cooking oil segment.

The company, which also manufactures palm oil-based products such as margarine and soaps, achieved over RM500mil in sales last year.

Kuek said the imposition of a ceiling price on the trading of edible oil had exposed edible oil refiners and producers like Lam Soon to constant risk of operating at low or even negative margins.

Lam Soon and other refiners under the Malaysian Edible Oil Manufacturers Association were currently working with the relevant authorities to address ceiling price issue, including removing the control on the selling price of palm oil products, he said.

According to him, CPO was currently trading at RM1,520 per metric tonne and recently went over the RM1,600 level.

“The local oil suppliers are appealing for the removal of the ceiling price or setting a higher ceiling price than RM1,450, should the CPO touch the RM1,500 level,’ he added.

Lam Soon marketing manager William Khoo said the 10% growth in sales was realistically geared towards the company's effort to beef up its sales, especially to make up for the setback in the first half of 2003.

“Actually, we are lucky as we have a diversified product category, including the blended oil (Knife), soft oil (Naturel) and refined palm oil – Buruh for price conscious customers. Through joint ventures formed in the past, the company boasts a vast product mix not only for cooking oil but also other palm oil products, including soaps. We are not totally dependent on cooking oil,'' he said.

The company is also looking at new product lines under Knife brand to take advantage of the four-time winner in the platinum category of the Reader's Digest superbrands survey, including this year's survey.

“For this purpose, we have identified at some food products,'' Kuek said.

On the advertising and promotional budget, Lam Soon is expected to maintain the annual RM1mil budget on Knife brand this year.

“Being the market leader for the past over 40 years, the job to maintain or raise market share has not been easy,'' Kuek said. 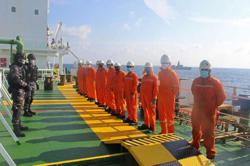