PICCOLO Mondo Gastro Sdn Bhd, operator of the Piccolo Mondo restaurant chain, will open its flagship restaurant on the ground level of Wisma Peladang in Jalan Bukit Bintang, Kuala Lumpur, early next year to replace the one at the Starhill Plaza.

The Piccolo Mondo chain, now comprising six restaurants in the Klang Valley, is best known through its outlet at the Starhill Plaza.

The upcoming restaurant, part of the refurbishment of the entire building which has been taken over by Piccolo Mondo owner Zek Catovic on a 69-year lease, is designed to stand out as one known for fine Italian cuisine and will be surrounded by extensive landscaped gardens and specially designed fittings.

“This restaurant with its gardens and “satellites” is part of the concept to improve the entire Bukit Bintang tourism belt and will comprise the restaurant inside on the ground floor, the island garden outside, and shops for tourists selling items like handicraft, silk and watches,” Catovic told StarBiz in an interview.

He said the restaurant, which he hoped would become like a “jewel in the crown” among the Bukit Bintang Walk outlets, was part of the Wisma Peladang project being undertaken by him and his long-time partner Suzanna Wong.

The whole project will cost a total of RM28mil and includes a 182-room budget hotel, and a mall level with outlets like fitness and beauty salons or upmarket shops, but no garish entertainment.

Catovic, a Bosnian who came to Malaysia in 1990, opened his first Italian restaurant Fratello at the Ampang Plaza in Kuala Lumpur and this was to be the forerunner of the Piccolo Mondo restaurants.

“The Malaysian economy was good then and there was good potential for the food and beverage (F&B) business,” said Catovic, who was trained in hotel management in Salzburg, Austria, and managed F&B outlets there as well as in Bremen, Germany, before returning to Bosnia from where he eventually came to Malaysia.

The first restaurant under the Piccolo Mondo name was actually opened by Catovic in Damansara Heights after his experience with Fratello in Ampang. He noted there was a demand for genuine Italian cuisine, and that the few in KL at that time, did not really provide what he considered genuine Italian fare.

Thus, in partnership with Wong, Catovic began a concerted effort at expanding his restaurants and his break came when the then-Hollywood Planet restaurant lot at the Starhill Plaza on Bukit Bintang Walk fell vacant and he got his chance to open an outlet there on what could be considered a prime location.

From then on, his restaurants began attracting customers who realised the food was good and today, Catovic said, each Piccolo Mondo on average could gross from RM900,000 to RM1.2mil a month.

Of the six restaurants that exist today – one in Bukit Bintang (under construction), one each in Damansara Heights, Mid Valley Megamall, Sungei Wang Plaza, Kelana Jaya and Sunway Lagoon, Catovic said he owned five while the other was in partnership with another party.

He is also planning another restaurant in Petaling Jaya, this time at Jaya Jusco in Bandar Utama, so “people will see there are Piccolo Mondo restaurants everywhere”.

Catovic, who runs his restaurants through Piccolo Mondo Gastro based in Bukit Bintang, also operates other companies involved in the F&B business and which own and manage several other establishments, mainly pubs and bistros with an emphasis on good food.

One of his latest projects which he has a high level of enthusiasm for is a “restaurant club” that will be known as The Hemingway Bar on Changkat Bukit Bintang and which has been planned to inculcate an old world atmosphere through nostalgia as well as carefully designed furniture and fittings, mainly old world-style and period pieces.

“This project will cost me RM1.2mil and will serve Tapas and Caribbean food, have a cigar club with Chesterfield sofas and have a relaxing atmosphere which I expect will appeal to the upper society. It's the kind of place that established business people can meet and talk business and pleasure,” Catovic said.

Catovic is confident that the club, with its period and “genteel” atmosphere, will be another success as his other outlets, a number of which are on Changkat Bukit Bintang including the Kingfisher pub, have proven popular with the denizens of Kuala Lumpur judging from the large crowds often found therein. Lack of focus in implementation of No-plastic Day 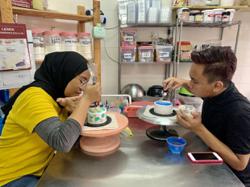