WHY is it that people are prepared to pay a premium for a famous brand? One of the most important reasons is the mark of quality that is attached to the name.

A company that produces quality products or services earns the trust of consumers and investors. There is a high degree of satisfaction and confidence so much so people will return to buy any other products that the company produces. Not only that, they also recommend the products or services to their friends and relatives.

In the case of property development, it can be quite difficult to build up this goodwill when the chain in quality control management is often broken and compromised.

One company that exemplifies the hallmark of excellence is the Brunsfield Group whose principal activities are property development and construction, information and communications technology, trading and manufacturing industries and international strategic business.

The average age of the 300 employees is about 27. Most of them are graduates and hired for special skills but all (hopefully) sharing the company's culture of dynamism, creativity and working as one big family.

It's not a very big company. In fact, its head office at 8, Jalan Wan Kadir 4 in Taman Tun Dr Ismail, occupies only a few blocks of three-storey shop offices built by the group itself.

However, a visit to the Brunsfield head office tells a lot about its staff and the management. For a start, the tastefully furnished office is a showcase of its quality products: from interior decorations, smart home/office technology to the world-class wooden garden furniture that it exports to more than 60 countries, including Europe and the United States.

The group recently completed a major renovation following its purchase of a corner block which forms an extension to its present office. This new block called the “West Wing” houses among others, the boardroom, nicely furnished departments as well as a lovely room for founder Gan Thian Leong, who has built the Brunsfield name into a household brand both locally and internationally.

Gan has allocated several rooms for R & D, lectures and training, a reflection of the group's emphasis on continuously adding value to its products and services.

Here is a company that believes in ensuring its staff members work in a conducive and open environment where creativity and communications are fostered. Gan's new office has a large glass panel and his office door is always open to his staff.

The group has many completed and on-going projects, including the Universiti Tek- nologi Petronas in Ipoh, the Cycle & Carriage headquarters, Naza Motors International Showroom, and the Cyberjaya Smart School.

Gan is proud of the group's latest achievement. Its subsidiary Brunsfield Information Technology Sdn Bhd, a pioneer of Malaysia's smart homes system, has been listed in the Malaysia Book of Records for the designs and implementation of the first smart homes system in Malaysia.

The first project was the Chief Secretary's official residence in the new government administrative capital in Putrajaya completed in 1999. Brunsfield Smart Homes System was subsequently installed at all other ministers' official residences and the surrounding residential developments in Putrajaya.

The system uses the latest technology to integrate home automation, intruder detection and home communication within a single product. It incorporates the most, user-friendly features to allow one to control and monitor virtually every household electrical appliance or device in one's home.

This is the third national record by the Brunsfield Group. Last year, the group with its joint venture partners FRIM and IJM, gained entry into the Malaysia Book of Records for the invention of the “first lightweight oil palm fibre reinforced cement composite panel”.

In 2001, the group through its subsidiary Brunsfield Engineering Sdn Bhd was listed in the Malaysia Book of Records for the “fastest completed design-and-build hypermarket project, the Giant hypermarket in Shah Alam”. It was completed within five months.

According to Gan, the group has three factories: a factory in Klang that produces barbecue sets for export, a factory in Shah Alam that manufactures wooden garden furniture for export and a factory in Puchong dealing in ID work. Its fourth factory, with a floor space of about 130,000 sq ft or the size of four football fields, will produce the light weight oil palm fibre reinforced cement panels which could be used as internal partition components in housing construction.

He said the first production was expected in June.

“Our capacity would be about three million pieces for the first year,” Gan said, adding that there was a huge market for this kind of “green product” that recycled oil palm wastes.

“We sell in US dollars and the nice part is that we are paid first before delivery. Our next baby is the e-homes which would incorporate features like e-entertainment and e-payments. We have our own e-home research centre where we are spending RM2mil on research,” he said, adding that the group strived to add value and meet the lifestyle needs of the people.

Reflecting on the past 12 years of doing business, Gan said that initially he felt being honest and professional was a “competitive disadvantage” but it had become a “competitive advantage” as people were prepared to pay a premium for the Brunsfield brand. 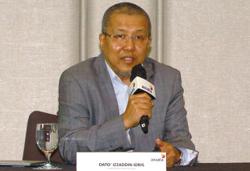 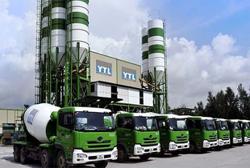