By JACK WONG IN KUCHING BY JACK WONG IN KUCHING

Called the Travilion, the first phase of the project costing RM50mil is based on a unique hub concept, which will showcase ultra-modern building design as well as lavish landscape.

Its executive chairman Datuk John Lau said the Travilion would be a distinctive development that provide a new experience in shopping, dinning and entertainment.

The first phase will comprise 37 units of 4-storey dual frontage shophouses, two 10-storey office towers and an open pavilion that serves as entertainment and fun centre.

“We want to fill the niche in the commercial retail market between that of the conventional shophouse and upmarket shopping mall,” he told StarBiz in Kuching yesterday.

Lau, who is also the founder and managing partner of Arkitek KDI Sdn Bhd, has designed the Travilion based on his 30 years of experience in the building industry.

The key feature of the Travilion, which comprised four central-corner shoplots and a 5,000 sq m open pavilion, was its hub concept.

He said San Chiang would own the pavilion and would select leading food, beverage and entertainment operators from the peninsula Malaysia. The pavilions could also be used for products promotions and exhibitions, he said.

“We are match-making the tenants and buyers of the shops. We will be selective in bringing in Kuala Lumpur-based leading fashion houses to sell branded goods.”

The Travilion has a 776-year lease period, and 620 parking lots.

Lau said the project had been very well received, with about 16 of the shoplots valued at RM18mil being snapped up during the first week of its launch recently. The shoplots were sold for between RM890,000 and RM2mil each.

He said San Chiang was now negotiating with a government institution to buy one of the 10-storey office towers. The company will keep the other tower for its own use. Earthworks for the project has started and the Travilion is expected to be completed in Aug 2004. 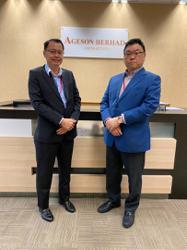