WHAT exactly do Lancome, Maybelline, Redken and Biotherm have in common?

Well, apart from being in the business of erasing age, and bestowing whatever Mother Nature has conveniently forgotten, these are all top-selling brands that consumers identify with. These brands are also marketed under the same company – L'Oreal Malaysia Sdn Bhd.

For the month of February alone, L’Oreal Malaysia, a subsidiary of a company with 13 global brands sold in Malaysia, grew by 42 per cent, making it the fastest growing business in the Association of South-East Asian Nations (Asean) and the second fastest in Asia for the L’Oreal group.

The first 2 months of 2003 also saw L’Oreal Malaysia growing by 33 per cent, making it the fastest growing country in Asean and the fourth fastest in Asia.

In fact, growth is not something new for L’Oreal Malaysia. Over the past 6 years, the company's business has tripled and grown by an average compounded rate of 20 per cent per annum. This sterling performance was achieved via a combination of organic growth, merger and acquisitions.

Therefore, what makes L'Oreal S.A. so different from its main rivals – companies such as Estee Lauder Companies Inc, Procter and Gamble Company and Unilever BV?

Apart from coming in the form of savvy businessman, L'Oreal (M) Sdn Bhd's managing director, Alvin Michael Hew, the company also possesses the technology to deliver revolution in a jar.

Hew says: “The sky is the limit in Malaysia. With penetration rates relatively low, the market has a lot of potential. Besides, we still hope to be the No. 1 beauty company in Malaysia one day”.

At the moment, the number one company is Procter and Gamble (P&G). Hew sees P&G relishing its crown to L'Oreal come 2005.

“If not for P&G's acquisition of Wella AG, we would have been number one by the end of this year. They are strong only because of their shampoo business (Pantene and Head & Shoulders),” says Hew.

US consumer goods giant P&G recently announced it would take control of German hair-care firm Wella in a 6.5 billion euro (US$7.02 billion) deal, giving it a boost against archrival L'Oreal.

Back in 1997 when Hew was initially general manager, L'Oreal counters were dull, in drab purple and white. A horrified Hew spent tens of millions glossing up the retail image of its 200 counters.

Sales traffic was almost instantaneous. L'Oreal's business grew by 75 per cent that year. It grew another 50 per cent the following year.

Certainly, Hew may be a strong advocator of beauty, but his roots as a merchant banker inevitably draws him to the more important issue of delivering good numbers.

“We added a lot more light and luminosity to the counters. We captured a lot more impulse purchasing after that,” says Hew.

In a matter of two years, L'Oreal Malaysia transformed from a subsidiary that initially was in need of capital injections, to a formidable company that is capable of generating excess cash and repatriating these funds to its parent company in Paris!

Currently, although L'Oreal is already distributed in three channels – consumer, luxury and the saloon division, it isn't stopping there. In fact, it is already testing waters in uncharted territory. Hew is not too keen to divulge at the moment.

Hew says: “Let's just say that we emulate our mother company in Paris. It is a business targeted at pharmacies. Currently, it is doing well in China and Vietnam. It is being tested out in Singapore and if it does well there, we will seriously consider it here in Malaysia,”

for its fast moving consumer goods (FMCG) and salon business in the 1980’s, L’Oreal Malaysia came into being in 1999 with the merger of LOCM (L'Oreal Cosmetics Malaysia) Sdn Bhd and Parfums & Beaute Sdn Bhd.

LOCM was incorporated in 1994 to independently handle the FMCG and salon business that were previously handled by Nestle. Parfums & Beaute was the company incorporated as a joint venture in 1993 between the agent and the L’Oreal group to handle its luxury business.

The merger enabled L’Oreal to organise itself more along divisional lines in line with its headquarters in Paris. It also enabled L’Oreal Malaysia to synergise its back room operations.

Currently, L'Oreal has approximately 17 brands and is available in 150 countries. In Malaysia, it has annual sales of RM1.5 billion with a market share of 10 per cent. In Asia, L'Oreal Malaysia is second only to Singapore.

For the financial year ended Dec 31, 2002, L'Oreal S.A. reported total sales of 14.29 billion euros, up 4 per cent from the previous year. Net profit before exceptionals and after minority interests was close to 1.5 billion euros, representing an increase of 18.5 per cent.

This marks the 18th consecutive year of double-digit profit growth.

When asked how L'Oreal Malaysia was performing, Hew says: “Well, our profit margins are healthy, but not yet obscene. It is well in line with global margins,”

Talking with Hew, it is clear that L’Oreal Malaysia aims to do more. A key focus area is in the development of the human capital of the country.

Through its L’Oreal E-Strat Challenge programme running annually, it hopes to contribute by developing the nation’s human capital to be more entrepreneurial, more creative and more independent.

Through its involvement with The International Association for Students Interested in Economics and Management (AIESEC) as a key sponsor and speaker at its National Leadership and Development Seminars, AIESEC members are challenged to develop its leadership skills and potential.

Through its partnership with the Ministry of Tourism and The Star on the KL Fashion Week 2003, L’Oreal is aiming to drive the development of creative skills of the nation. 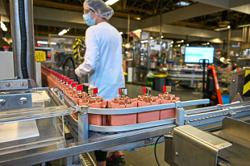