and Tan & Tan Developments Bhd have proposed a joint venture to develop 53ha in Wangsa Maju which could have a gross development value of between RM600mil and RM700mil over a period of eight to 10 years.

Landmarks expects the development of low-density residential properties, which would be undertaken by 70%-owned subsidiary Landmarks Land & Properties Sdn Bhd and Tan & Tan unit Nova Pesona Sdn Bhd, to increase the development value of the group's other property projects within the vicinity of its Wangsa Maju township.

In a statement to the KLSE, Landmarks said the proposed joint venture would allow it to focus its attention on the undeveloped commercial area in the same township.

However, the joint project, which is to be divided into three phases, is not expected to contribute to Landmarks' financial performance this year.

Landmarks Land general manager Tan Ching Meng said he was confident the low-density development would find willing buyers as other higher-priced properties within the Wangsa Maju township were easily sold.

At the briefing, Mohamed said Landmarks would return to the black this year and remain profitable after completing much of its asset disposal and financial restructuring.

“If the assets continue to perform well, we will see some upside,'' he said.

Mohamed said while the Sept 11, 2001, terror attacks on the United States and last year's Bali bombings had affected its hotels, there had been signs of improvement recently.

He said the performance of company's Andaman hotel had been improving and the group was seeing more Malaysians staying there. “We have to wait longer to see whether this is a trend,'' he added.

Mohamed said the crisis caused by the terrorist attacks had forced the group's hotels to look for guests from new markets and he was hopeful more visitors from Europe would be attracted to the establishments after the ringgit's weakening against the euro.

He also said Sungei Wang Plaza Sdn Bhd, an important unit, would post slight growth this year after 40,000 sq ft of retail space was added to the shopping centre. Future expansion of Sungei Wang could involve trimming the available carpark bays, he said.

Mohamed said the number of people patronising the shopping centre was still increasing but the group expected a temporary blip in the number when new malls were opened.

The group is also considering refinancing Sungei Wang's RM220mil 10-year debt which carries an interest rate of about 8.5% to maturity.

, in which Landmarks has a 27% stake, to post profits this year after the completion of major renovations last year, and 20%-owned Teknologi Tenaga Perlis Consortium Sdn Bhd, an independent power producer, to contribute to the group's results this year.

He said Qualitas wanted to increase the number of its clinics and he saw the firm as having the potential to be listed within the next three to four years. 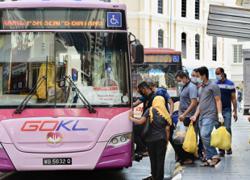