It is believed that KL Sentral will soon sign a 15-year tenancy agreement with PricewaterhouseCoopers Malaysia to occupy about half or 150,000 sq feet of the lettable space of a 30-storey tower. The building is scheduled to be completed in 3 years' time.

Getting long-term investors and tenants in an industry where outlook is not so encouraging is no easy task. MRCB is well aware of that. In a recent circular to shareholders, the company pointed out that the general outlook for the property market might continue to be affected by the overhang of property, particularly for commercial space.

Still, given the strategic location of KL Sentral, the group is confident that the project will attract premium pricing and sufficient demand. But just to be sure, sources say, KL Sentral is eager to secure tenants and investors before it goes ahead to build any of its commercial complexes.

However, the company says there may be a timing gap between the receipt of proceeds from property sales and the date the financial obligations for the property development become due, including MRCB's obligations under its financing arrangements to maintain Kuala Lumpur Sentral Sdn Bhd's debt-equity ratio covenant and KL Sentral's financing obligations. Clearly, all of this very much depends on the financial performance of the project.

A source within KL Sentral says that the company is providing a viable investment alternative to the investors by providing them with an attractive investment return for a period of at least 12 to 15 years. The area is valued at some RM500 per sq foot.

“The owners of the buildings will be able to enjoy the appreciation in property value over the lease in view of their location surrounding the transportation hub,” says the source.

A good example would be the Tabung Haji. The headquarters KL Sentral is building for Tabung Haji carries a yield of 6 per cent net return.

An analyst from a foreign research feels that KL Sentral should face no problems with its take up rates. “It is a good location after all. Planted in and around this flow of transportation arteries will be a collection of carefully integrated office, hotel and retail outlets,”

Analysts had earlier estimated that MRCB would be able to secure RM150 million-RM200 million in-house work just from KL Sentral's Phase 2 development in financial year 2003. It is very likely that KL Sentral will drive most of MRCB's property activities over the next few years.

In the pipeline are also plans to develop a 1.2 million sq ft retail shopping complex, office block and apartments. Analysts are guessing that leasing rates would be somewhat similar to the rates in Kuala Lumpur City Centre, which would be about RM3-RM4 per sq ft.

“A good take up rate would definitely benefit KL Sentral, and above all, MRCB. Still, the returns are likely to be seen over a longer period. It's only natural as the project is targeted to be completed in 2012,” says the analyst from the local research.

The only headache he foresees is the hefty amount MRCB is forking out for the interest payment on KL Sentral's debt totalling about RM1 billion.

As at August 2002, MRCB's total debts stood at RM1.56 billion. The completion of MRCB's debt settlement has reduced the group's borrowings to RM1.09 billion, which relates mainly to the RM920 million KL Sentral bond and a further RM150 million secured on properties. The first tranche of the KL Sentral bond of RM120 million is not too far away. It is due in April 2003, while the remaining tranches are due between 2006 and 2011.

“It’s actually a good project, but due to the economic crisis, the developments had to be deferred. That’s when the debt servicing issue reared its ugly head,” continues the analyst.

Once completed, Kuala Lumpur Sentral will make available 19.1 million sq ft of world-class working, living and leisure space. At the heart is a transportation hub that brings together the commuter, intercity and airport express rail networks with Kuala Lumpur's light rail transit system.

MRCB has forecast a group profit after tax of RM219.1 million for the year ending Aug 31, 2003. In a circular to shareholders, the company says this is an improvement to the actual audited profits for the financial year ended August 2002 of RM176.4 million.

“It should be noted, however, that the results of both years include profits on disposal of non-core investments which are non-recurrent in nature,” the circular points out that the forecast profit for financial year 2003 is mainly related to the disposal of Rashid Hussain Bhd which will result in a gain of RM284.7 million.

In January, MRCB announced that it had entered into a share sale agreement to acquire a 100 per cent equity stake or 320,000 ordinary shares of RM1.00 each in Landas Utama Sdn Bhd (LUSB) which in turn holds a 24.93 per cent equity stake in UDA Holdings Bhd. The price of the UDA stake is said to be RM224.5 million.

By taking over Landas Utama's stake, MRCB will manage UDA and get a shot at forming joint ventures to develop properties in prime locations together. Such projects will provide MRCB with immediate cash flow that could prove useful in reducing the financial burden of developing KL Sentral. KL Sentral is also synergistic with UDA's urban development portfolio.

Speculation has been rife that MRCB's KL Sentral project would likely be injected into UDA in the future. Although analysts are not keen to say anything, they are certainly not discounting this possibility.

And indeed, the move would come as no surprise. UDA is rich in assets, with virtually no borrowings, and is sitting on a RM160 million cash pile. Another RM120 million is set to flow into its coffers after it completes a land sale to Magnum Corporation.

After MRCB's restructuring, it will still be geared up to RM1.1 billion at group level, which mostly comprises debts related to the KL Sentral project. 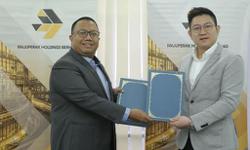