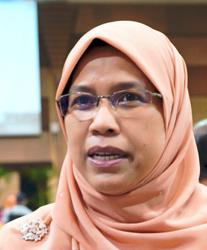 DESPITE its low-profile status, property developer TPPT Sdn Bhd has successfully completed notable property projects worth more than RM1bil, mainly in Selangor, Johor, Penang and Sabah over the past 12 years.

Initially set up by Bank Negara in 1990 with the task of taking over and managing property projects left abandoned by financially hit property developers during the 1980s recession, the company has fully revived about 18,585 units with gross development cost totalling RM331.3mil under the central bank's abandoned housing project fund, better known as Tabung Projek Perumahan Terbengkalai, in the mid 1990s.

The company has also been active in developing low-cost housing projects nationwide and to date has completed nine projects totalling RM756mil.

TPPT Sdn Bhd managing director Hidzir Yahya told StarBiz in an interview in Kuala Lumpur: “Backed by our 12 years' experience, we believe TPPT is ready to move forward to become a prominent industry player over the next five to 10 years.”

In the past, with the strong support by Bank Negara, TPPT was able to undertake studies on abandoned housing projects detected since 1983 and then help to revive some of these ailing projects.

According to a survey undertaken in 1999, there were 493 abandoned housing projects nationwide involving 96,247 units with total cost of development estimated at RM5.76bil.

As TPPT has fully completed its task of reviving the abandoned housing projects, the focus now would be to look at new tasks to further strengthen TPPT's position as a reputable player dealing in property development and management.

However, he added: “It was never our intention to compete with the existing big boys of the property industry. We play a complimentary role in providing affordable housing to the public.”

“A major task aspect of TPPT is that its projects nationwide will look into property development with equal consideration for property buyers who are also in the lower income brackets,” he added.

To date, TPPT has close to 2,000 acres of land bank, mainly located in the Klang Valley, Johor Baru, Penang and Kota Kinabalu.

According to Hidzir, the company plans to fully tap into the wide opportunities in the local property development and management related projects by aggressively promoting the four government funds it currently manages.

The funds include the low-cost housing fund (TPPKR), the abandoned housing project fund (TPPT), the hardcore poor housing fund (YPUT) and the PROSPER scheme to boost bumiputra participation in the retail sector.

On the low-cost housing projects, Hidzir said “We have more projects in the pipeline for this year but it is still too preliminary to make any announcement.”

With future projects being planned, he said TPPT was strengthening its current position as property developer and manager with the launching of its latest project under TPPKR - Taman Pasir Permata - near the Old Klang Road in Kuala Lumpur.

He said the new 12-acre project was a joint-venture project with landowner, the Kuala Lumpur City Hall (DBKL). Slated for completion next year, the three-phase project was expected to generate RM81mil in sales, Hidzir added.

“Taman Pasir Permata, which offers low cost, low medium and medium costs apartments and shop lots, is timely considering the works are already progressively underway for the six-lane highway for the Old Klang Road and this will be a major and strategic consideration for potential house buyers once the project is completed.”

Among the facilities are shops and a swimming pool for the apartment units, coupled with a 24-hour security guard service.

“This new project offers unique living opportunities to those living in the city. Besides its affordable price range, it is located in an area with lush green surroundings and less than five minutes' drive to the city centre and KL Sentral Station,” he added.

Taman Pasir Permata's location in the same vicinity of other established townships such as Taman YARL, Taman OUG and Taman Nam Fong also makes it a natural choice for property owners as the area is self contained, with easy access to public amenities like banks, children playgrounds, a police station and shopping complexes.