Nando’s spices up for expansion

NANDO’S Chickenland (M) Sdn Bhd – the casual dining franchise specialising originally in Afro Portuguese cuisine from Johannesburg, South Africa, and whose menu now includes a range of Malaysian dishes – is confident of growth this year, expects to be profitable and is even looking at a listing three years from now.

Its director Chung Lynn Mac Carpenter said that although she expected 2003 to be a pretty tough year, Nando’s, a joint venture between Mac’s family and principal Nando Resources BV, could well achieve the desired results with the right mix of controls, branding, marketing services, restaurant service and other aspects.

“People want value for money, so as part of our positioning, over the last three to four years we have introduced various items to our menu, such as our combo, always ensuring our menu items provide quality. The improved menu is designed to give better value for money as well as variety and flexibility of choice,” Mac told StarBiz in an interview.

Mac said the success of Nando’s as a casual dining restaurant hinged on a number of differences such as the key role played by the manager of each outlet, who at Nando’s is called the patrao which is Portuguese for head of the house and who thus acts as the host to customers.

“We want our managers up front in our restaurants dealing with everything so that they come to think of the restaurants as if it were their own house. With this method, 30% of our people do feel special although this is still nowhere near what we want,” Mac said.

She said that since the inception of the franchise, Nando’s had undergone various concept changes to the betterment of the restaurant chain, such as in the first year when it pursued a full service concept followed by the serving of fast food and which had been streamlined two years ago when the restaurant switched to casual dining and its current menu servings.

Mac said when Nando’s started out, the company tried various means to create an identity for itself, beginning with an external consultant and then switching over to in-house promotions subsequently to create its identity and a brand name, which as Mac said: “Is not quite there yet.”

She added that in the last one-and-a-half years though business had picked up somewhat and that Nandos had taken some two to two-and-a-half years to “find its feet” especially since the beginning of its branding exercise and the introduction of new menu items which had resulted in better sales.

Another of the changes Mac attributed to Nando’s current success is its open plan kitchen where customers can actually see what is being prepared, how things are done and the work ethic of the back room staff, a process she refers to as a level of “showmanship” necessary to her plans.

Nando’s, which began in South Africa and is actually the short version of the founder’s name Fernando, specialises in dishes with the condiment peri-peri or chilli, such as its flame-grilled peri-peri chicken, peri chips, peri corn, peri soup and so on.

Begun with the first outlet opened in Bangsar in 1998, Nando’s was popular with teenagers out on dates, said Mac, aside from which it was generally considered a family oriented restaurant and was also popular with corporate types as adjudged from the crowds at lunchtime.

In line with the anticipated growth in 2003, Mac said Nando’s, which has 13 outlets currently (nine in the Klang Valley, three in Penang and one at the First World Hotel in Genting), was looking to open one in Malacca’s Jaya Jusco, possibly another three in Penang and one in Johor although, these opening would depend on economies of scale.

Mac said that opening new outlets was an exercise that depended on certain key factors uppermost being location, although in Nando’s case, location usually meant being in a high traffic area such as within the precincts of an established mall or major department store such as Jaya Jusco.

“In Jaya Jusco we (would like to) have three or four stores, while at a hypermarket such as Tesco’s we would like to open a ‘branded’ outlet as we would be dealing with a different customer profile, mainly those in the middle to higher income bracket although our target customer group falls within the 18 to 40 age bracket.”

She added that Nando’s also had plans to open outlets in certain areas such as Damansara Utama and its environs where, with the expected upmarket clientele, Nando’s would endeavour to cater to their needs with the requisite flexibility while retaining its core cuisine.

Mac said the key focus of Nando’s would remain within the Klang Valley, at this time anyway, and that she had in fact already earmarked a few places for potential outlet locations in Selangor, while noting that Nando’s plan was to open at least 40 outlets over the next three years.

Among Nando’s expansion plans, Mac said there was also an inclination to begin opening outlets in Singapore where positioning of the outlet was an imperative although a potential spot in Orchard Road had been noted.

Nando’s, which ploughed back 5% of sales into marketing communications (mainly below-the-line advertising such as pamphlets and promotions), realises the need for a greater emphasis on branding and will accordingly take steps to create a greater awareness of its presence in the casual dining market.

She said Nando’s hoped to get listed on the local bourse within four years. Ultimately, Nando’s expects to become one of Malaysia’s better known casual dining outlets with a reputation for quality of service, food as well as the house speciality peri-peri and a flexible menu that caters to what the customer most desires. 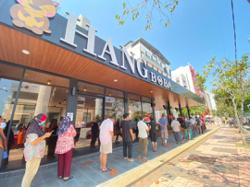