SKP Resources gearing to be one-stop centre by 2005

expects to become a one-stop service centre by the year 2005.

SKP said it believed that being a one-stop service centre would benefit customers, who would then not have to transfer moulds or semi-finished plastic parts from one supplier to another for finishing works.

“This reduces the need for repeated handling by different parties of product components and wastage in the manufacturing process, as well as saves on transportation costs and production lead time,” it said in a statement.

SKP, slated to list on the KLSE second board next month, said it was now gearing itself to provide all the services required for a customer to fit the component directly into the end product.

SKP said that in the manufacturing environment, where competitive advantage was highly dependent upon the efficiency in utilisation of limited resources, the services that the group could provide as a one-stop centre would be highly valued by its customers.

To achieve its goal of becoming a one-stop centre, the group planned to expand its mould-making facility under subsidiary Goodhart Technology Sdn Bhd, enhance its product range with focus on precision and big tonnage plastics injection moulding, as well as lessen its dependency on unskilled labour through greater emphasis on robotic systems and process automation.

SKP Resources group is principally involved in the manufacture of plastic parts and components, precision mould making, sub-assembly of electronic and electrical equipment and other secondary processes.

The group manufactures plastic parts and components for multinational companies (MNCs), which in turn incorporates them into electrical and electronic products for export, mainly to the US, Europe and Japan.

In conjunction with its proposed listing, the group is making a public issue of 7.2 million new shares of RM1 each at an issue price of RM1.50 per share. Of the 7.2 million shares, 1.5 million would be made available for the public, 2.4 million for the group’s eligible employees and 3.3 million for private placement.

SKP said it offered a wide range of services – including prototyping, tooling and injection moulding – with specialty in audio and visual products. It also provides a range of secondary processes and, through the years, has expanded downstream by providing sub-assembly facilities as part of its one-stop service centre concept.

SKP has manufacturing facilities in Batu Pahat, Johor, which are operating at 50% to 60% capacity.

SKP supplies its products mainly to the electronics and electrical products sector, particularly to MNCs having manufacturing facilities in Batu Pahat, Kluang, and Singapore. They include Pioneer, Fujitsu and Sharp-Roxy.

For the financial year ended March 31, 2002, and the four months ended July 31, 2002, products sold to the electronics and electrical products industry contributed 67% and 66% respectively to group revenue.

SKP has forecast a consolidated profit before tax and minority interest of RM12.1mil from revenue of RM70.12mil for the financial year ending March 31, 2003. 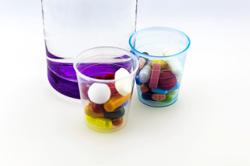